The arrests follow the launch of a nationwide sweep for melamine-tainted milk goods after several products laced with the industrial compound, which killed at least six children in 2008, reappeared on shop shelves.

Two years ago a scandal over melamine-tainted milk led to the death of at least six children and sickened up to 300,000 others.

According to Xinhua the four detained men are are suspected of overseeing an operation in which untainted milk powder was mixed with melamine-infused powder.

The chemical, normally used in manufacturing plastics, can be added to diluted milk products as a way to fool quality control tests for protein levels.

Watering down milk allows dairy companies to stretch their profits.

However, if ingested melamine can cause a range of health problems including kidney stones and, in the worst cases, kidney failure.

Concerns about tainted milk products peaked again early this year after authorities in Shanghai said they had secretly investigated a company for nearly a year before announcing it had been producing contaminated products.

The Shanghai Panda Dairy Company was one of the 22 implicated in the 2008 scandal, with authorities reporting that its products had among the highest levels of melamine.

On Tuesday, Chinese officials launched a 10-day nationwide crackdown, pledging that “all melamine-tainted milk products will be found and destroyed”.

The crackdown came after the discovery of melamine-tainted dairy products that had reappeared on store shelves in the southern province of Guizhou. 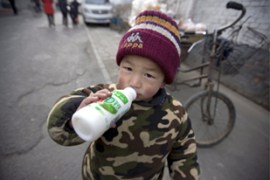