On a normal Thursday evening, a group of protesters transformed San Francisco’s busiest shopping district into a scene which reflected the realities of Palestinian life in Hebron in the West Bank.

We closed a major street running through the financial heart of the city in hopes of raising attention of Israeli road closures and restrictions of movement that are imposed every day on Palestinians in Hebron.

The blocking of major thoroughfares in the city culminated in nine arrests, after protesters holding a banner that read “Israeli Apartheid closes streets” closed off Powell Street and refused police orders to disperse.

Handing out Palestinian and Israeli “identification documents”, actors playing Israeli soldiers in uniform forced “Palestinians” and “Israelis” to walk on separate sides of the barrier; often roughing up and harassing those playing Palestinians.

Unsuspecting passers-by were incorporated into the theatre performance and forced to walk on one side or the other.

“Shuhada Street [in Hebron] is just one example of the larger Israeli apartheid system that US tax dollars finance. We hope to bring awareness about Palestinian daily life to Union Square shoppers,” said Kramer, who was later arrested by San Francisco police.

The San Francisco direct action was organised by a diverse group of Bay Area activists including Dialogues Against Militarism, People of Colour Action Theatre, the International Jewish Anti-Zionist Network, Iraq Veterans Against the War, the Catalyst Project and War Resisters League.

Participants came from a wide range of affiliations, including members of Students for Justice in Palestine, Bay Area Campaign to End Israeli Apartheid, and members of various anti-war and racial and economic justice organisations.

This was one of 25 protests around the world, from Cape Town to Berlin to Sydney to New York, on this international day of action to call for re-opening Shuhada Street.

In Hebron itself, hundreds of Palestinians attempted to march down Shuhada Street and were met by a heavy military presence that fired tear gas and stun grenades at the crowd.

More than 300 Palestinians and 30 Israelis also demonstrated at the Ibrahimi Mosque/Tomb of the Patriarchs in Hebron, to protest Tel Aviv’s recent declaration of the spot as an “Israeli national heritage site”.

Shuhada Street was once a bustling thoroughfare, filled with Palestinian homes and shops, running through the centre of Hebron.

Today, it has been transformed into a virtual ghost street, with boarded up storefronts and homes; a heavy military and settler presence everywhere.

Just south of Jerusalem, this city is home to 170,000 Palestinians.

Under Israeli military occupation since 1967, Hebron (or Al-Khalil as it is known by the Palestinians) has seen a steady influx of settlers since the 1970s, now numbering 800.

On February 25, 1994, an Israeli settler, Baruch Goldstein, entered the Palestinian side of Al-Khalil’s Ibrahimi mosque and sprayed machine gun fire at Palestinians in kneeling in prayer.

He killed 29 and wounded more than 270. In response to this massacre, the Israeli government imposed what it called “security measures” upon the Palestinian residents of Al-Khalil, effectively shutting down entire Palestinian neighbourhoods and city centres.

A curfew for Palestinians was enforced, food markets and hundreds of businesses were boarded up and closed, and a “system of separation” was imposed.

The city was cordoned off into Palestinian-controlled and Israeli-controlled areas, and matrices of barriers, walls, and razor wire were built to keep these populations separate.

A daily presence of 1500 soldiers has since been deployed there under the guise of maintaining security.

As a result, most Palestinians living in the areas that have been declared Israeli have been evicted from their homes, which are now occupied by settlers and military installations.

Everyday life for Palestinians in Al-Khalil is delineated by military occupation, control of movement, and settler violence.

Shuhada Street is a striking example of the apartheid policies that have been built into this city. Walking down the street, one sees Israeli soldiers on patrol, and on occasion, Palestinians peering out of windows covered with screens to protect them from rocks thrown by Israeli settlers.

Those Palestinians who remain are not allowed to access their homes from Shuhada Street (most of their front doors have been welded shut), and they are forced to climb over rooftops to get inside.

We focused on raising awareness of Shuhada Street because it has become a flash-point for the systematic denial of Palestinian human rights under the guise of what Israel calls “security.”

We brought this reality home to our city streets because our own US government is the largest military supporter of Israel, and we urge our peers to confront the reality of what this support looks like on the ground in Palestine.

“The US is Israel’s primary political and military patron, so its US tax dollars buying the weapons used against Palestinians in Al-Khalil,” says Clare Bayard of Dialogues Against Militarism and The Catalyst Project.

Bayard believes that it is US support which has enabled Israel to enforce its “apartheid policies on the Palestinians”.

She says the protests have been held to raise awareness of US militarism at home and abroad, and to call for global solidarity with Palestinian movements for justice.

Mai Doan of the People of Colour Action Theatre said he hoped to shed light on how local governments, cities, and peers can take collective action to prevent repressive policies against Palestinians.

She said: “In an act of international solidarity, we are disrupting the silence and complicity of the day-to-day to vocalise and make unavoidably visible the violence of apartheid in Palestine/Israel.”

Sarah Lazare is an anti-militarist and GI resistance organiser with Dialogues Against Militarism and Courage to Resist. She is interested in connecting struggles for justice at home with global movements against war and empire. 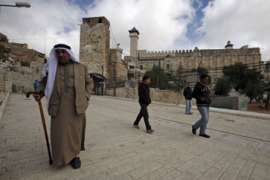 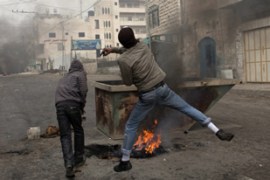 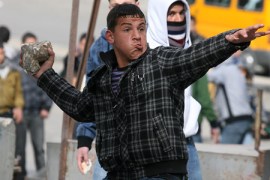 Palestinians are angered by Israel’s plan to restore two sites in the West Bank. 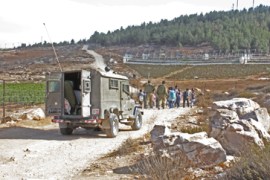 Palestinians heading to class say they are often attacked by Israeli settlers.