With tensions high ahead of the ruling, Thai media has labelled the verdict “judgement day”.

Over the last four years the country’s politics have been dominated by a bitter and sometimes violent rivalry between the allies and foes of the former telecommunications tycoon.

The conflict pits the military, the urban elites and the so-called Yellow Shirts, against the Red Shirts who are mainly rural Thaksin supporters who claim disenfranchisement.

The court will rule on whether Thaksin illegally transfered his fortune to family members because he was prohibited from holding company shares while prime minister, and whether his administration implemented policies that enriched his business.

A nine-judge panel at the court’s special Criminal Division for Political Office Holders will begin reading their ruling at 1pm local time (06:00 GMT) and are expected to finish after the market closes, ahead of a three-day holiday weekend.

Technically the court decision is final, though defence lawyers have 30 days after the ruling to submit new evidence deemed significant to the case.

The verdict is timed to minimise the blow to Thailand’s stock market, which like the economy and tourism industry, has suffered through the instability.

But there are concerns that the risk of renewed civil unrest could damage the country economically.

Abhisit Vejjajjiva, the Thai prime minister, called for calm on Wednesday, saying: “If everybody remains calm and accepts the [ruling], Thailand will get through this situation.”

Thaksin’s supporters say no protests are scheduled for Friday but a peaceful “million man march” will be held March 14 in Bangkok.

The Red Shirts, known formally as the United Front for Democracy against Dictatorship, have accused the government of pushing fears of violence to discredit their movement.

Thaksin, who denies all the charges, fled into exile ahead of a 2008 conviction for conflict of interest that resulted in a two-year jail sentence.

He has said he is willing to negotiatie, but that “if I am persecuted and bullied, I will not tolerate it”.

Thitinan Pongsudhirak, a political scientist and director of the Bangkok-based Institute of Security and International Studies, warned the expected court ruling was unlikely to end Thailand’s crisis.

“[This is] because now the Red Shirts have evolved into their own force to be reckoned with,” he was quoted by The Associated Press as saying. 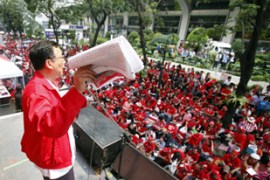 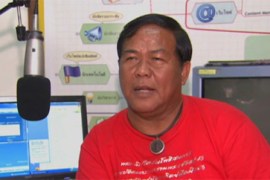 Supporters of ousted PM vow action if court rules in favour of seizing his assets. 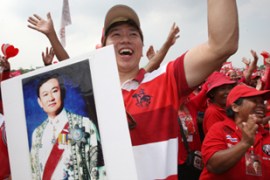