January 2004 – The army moves to quell uprising in western region of Darfur; hundreds of thousands of refugees flee to neighbouring Chad.

September 2004 – UN says Sudan had not met targets for disarming pro-government militias and must accept outside help to protect civilians. Colin Powell, US secretary of state, describes Darfur killings as genocide.

January 2005 – UN report accuses the government and militias of systematic abuses in Darfur, but stops short of calling the violence genocide.

March 2005 – UN Security Council authorises sanctions against those who violate ceasefire in Darfur. Council also votes to refer those accused of war crimes in Darfur to International Criminal Court.

May 2006 – Khartoum government and the main anti-government faction in Darfur, the Sudan Liberation Movement, sign a peace accord. Rival SLA faction and the smaller Jem reject the deal.

September 2006 – Sudan says African Union troops must leave Darfur when their mandate expires at the end of the month, raising fears that the region would descend into full-blown war.

Activists rally in major cities around the world calling on Sudan to allow UN peacekeepers into Darfur.

October 2006 – Jan Pronk, the UN’s most senior official in Sudan, is expelled.

November 2006 – African Union extends mandate of its peacekeeping force in Darfur for another six months.

December 2006 – Sudan agrees in principle to accept the deployment of UN troops in Darfur as part of an expanded peacekeeping force.

May 2007 – George Bush, US president, imposes new US sanctions on Sudan and asks for support for an international arms embargo to end what he calls genocide in Darfur.

August 2007 – Security Council authorises 26,000 troops and police for Darfur’s hybrid mission and approves the use of force to protect civilians.

May 2008 – Jem fighters make a lightning attack that reaches outskirts of Khartoum. About 65 people are killed.

July 2008 – Luis Moreno-Ocampo, prosecutor for the International Criminal Court (ICC), asks judges for an arrest warrant for al-Bashir on crimes of genocide, crimes against humanity and war crimes in Darfur.

October 2008 – Al-Bashir pledges more co-operation with Unamid to secure the passage of aid convoys, along with up to $350m of spending on development in the region.

November 2008 – Al-Bashir announces a ceasefire in the region but Jem says the announcement is not serious and vows to fight on.

The Darfur Consortium of over 50 African charities releases report saying hundreds of non-Arabic speaking civilians have been made slaves to militias and government troops.

February 2009 – Sudanese army declares the capture of a town in Darfur after three weeks of clashes with Jem fighters.

March 2009 – ICC order the arrest of al-Bashir on seven charges of war crimes and crimes against humanity in Darfur, the first warrant issued for a sitting head of state.

Al-Bashir expels 13 international aid organisations accusing them of working with the ICC on the arrest warrant. Three local groups are also shut down.

Jem rebels pull out of second round of peace talks scheduled to be held in Doha in April and demand that the aid groups are allowed to return.

February 2010 – Appeals chamber of the ICC directs judges to rethink their decision to omit genocide from the warrant out for al-Bashir’s arrest.

Idriss Deby, Chad’s president, makes landmark trip to Khartoum. He and al-Bashir announce intention to normalise ties. Later Jem announces an accord with Sudan’s government leading to ceasefire, to be signed in Qatar. 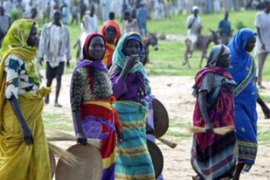