Since Batasuna’s ban other separatist parties have sought to fill the gap but they too have been banned by Spain’s courts, leading to the formation of the region’s first non-nationalist government after elections last March.

It was unclear how the Spanish government would respond to the offer after a “permanent ceasefire” declared in March 2006 ended after just eight months with a bombing at Madrid airport that killed two people.

Jose Luis Rodriguez Zaptero, the Spanish prime minister, had begun tentative talks with the banned group before the attack, but said afterwards ruled out any more negotiations.

Since then, his government has adopted a harder line Eta, working with French authorities to arrest dozens of suspected Eta and Batasuna members.

Alfredo Perez Rubalcaba, Spain’s interior minister, said last week that Spain, France and Portugal were working closely together to tackle Eta and would meet on February 23 to sign an agreement aimed at closer police co-ordination.

Exteberria, who was recently released from prison on bail while charges of co-operating with Eta are investigated, said the separatist movment could not wait for the government’s stance to change.

“It’s essential that the political and social groups that support this take a new path together. Without that the Spanish state is not going to change its attitude,” he said.

Commentators in the Spanish media have suggested that Exteberria’s call is part of a move to have pro-Eta parties legalised.

Eta, whose initials stand for Euskadi ta Askatasuna, or Basque Homeland and Freedom in the Basque language, is considered a terrorist group by Spain, the European Union and the US. 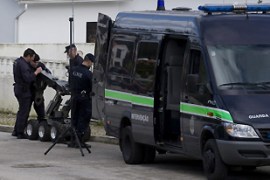 Half tonne of explosives seized in cache allegedly used by the separatist group Eta.