The United Nations has launched its largest appeal ever for a natural disaster to help millions of Haitians displaced by last month’s earthquake.

The appeal for nearly $1.5bn made on Thursday is almost three times the world body’s initial request made on January 15.

According to the UN, more than 1.2 million Haitians need emergency shelter and urgent sanitation facilities, with up to 2 million more in need of food.

Ban Ki-moon, the UN secretary-general, and his special envoy for Haiti, Bill Clinton, the former US president, launched the appeal at a meeting with diplomats in New York on Thursday.

“We are with you,” he said, addressing the people of Haiti.

“We will help you to recover and rebuild.”

Ban said that with the rainy season approaching, the top priority was to provide shelter, sanitation and humanitarian assistance.

“Before last month’s disaster we had a plan for Haiti’s long-term development and reconstruction,” he said.

“Our challenge today is to reformulate that plan to help Haitians build back better.”

Clinton told the diplomats the appeal was important to begin long-term rebuilding, but the world must first help millions of Haitians deal with daily problems such as healthcare, infrastructure and livelihood.

He told potential donors “it is very important not to have courtesy commitments”.

“If you can’t give what you wish you could, pledge less and give it, and do it sooner rather than later,” he said, vowing transparency in tracking all donations and expenses.

Before Haiti, the largest UN appeal for a natural disaster was $1.41bn following the 2004 Asian tsunami that struck a dozen countries around the Indian ocean and left 230,000 people dead.

The UN says the size of the revised Haiti appeal, covering about 30 per cent of the Caribbean nation’s population, reflects the scale of the catastrophe caused by the January 12 quake that killed over 200,000 people.

But the appeal also comes as the leading UN humanitarian official criticised the relief efforts so far.

John Holmes said in a leaked email to the UN and other aid agencies that he was “disappointed” by the failure to provide more shelters and other services for the displaced population.

“I fear we have simply not yet injected the necessary resources in some areas in terms of capacity to implement practical programmes and deliver on the ground,” he is reported to have said in the leaked email.

“I ask you all to take a fresh hard look at what you are able to do in the key areas, and pursue a much more aggressive approach to meeting the needs.”

But Holmes disputed the negative characterisation of the email on Thursday, saying that would “disrespect” hundreds of people working in Haiti “in incredibly difficult conditions and actually doing a very good job”.

Holmes said he was making a technical point about “the kind of trust and leadership support that’s needed rather than saying we’re failing in some way”.

“What I’m trying to say is there’s still a huge amount to do,” he told reporters.

“We’ve achieved a lot in the first month in particular in areas like water and food and health,” he said. “But we recognise that we have a lot further to go.”

More than a month after what some experts see as the worst natural disaster in modern history, many Haitians say they have yet to receive aid.

Aid workers are racing to distribute enough tarpaulins to the more than one million people left homeless in the capital, Port-au-Prince, before the rainy season starts in April.

General Nicolas Matern, the Canadian deputy commander of the Haiti Joint Task Force, said tarpaulin deliveries were being ramped up to try to reach all of the homeless with some form of shelter before the rainy season.

“There is an impression out there that we will be able to turn around and build transitional shelter with framing and all that by the rainy season. Forget it,” he said.

“It ain’t going to happen. We don’t have the resources nor the time to do it.”

Meanwhile, the first passenger flight since the January 12 earthquake arrived in Port-au-Prince on Friday.

The American Airlines from Miami landed with 132 passengers onboard and with one of the pilots waving a Haitian flag from the cockpit window.

“It’s good for the reconstruction of Haiti,” Martha Pantin, the American Airlines spokesperson, said. “We were the last ones out; we are the first ones in.”

Since the earthquake the country’s largest commercial airport has resembled a military base, with more than 100 armed forces and UN flights passing through each day. 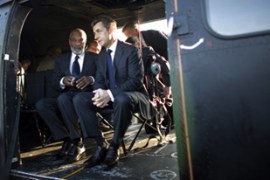 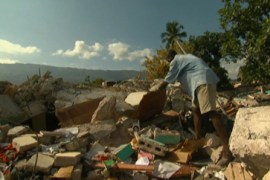 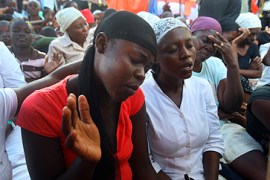 Haiti still desperate one month on

Haitians mark day of mourning as families struggle for basic food and shelter. 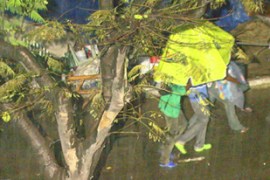