Al-Mutlaq is one among 145 candidates barred from contesting the upcoming elections by a de-Baathification committee. The ban has subsequently been upheld by the Iraqi supreme court of appeal.

The banned candidates, however, were considered secularists, who were likely to do better in the elections than the Islamist parties that have dominated Iraq since the US-led invasion in 2003.

The Iraqiya list has said it will still participate in the election despite the boycott by one of its members.

“The list believes that the best reaction [against the candidate ban] is wide participation in the coming election and for our list to achieve a great win and to make forward-looking change,” Maysoun al-Damalouji, a spokeswoman for Iraqiya, said.

The parliamentary ballot takes place at a critical juncture when Iraq is trying to move away from years of sectarian violence between Shia and Sunnis and rebuild its war-ravaged economy.

Both the Iraqi government and the US administration hope that Sunni participation in March 7 election would help end a bloody armed opposition launched by Sunni Iraqis after they boycotted the 2005 elections.

But the ban on candidates over Baath Party links has fanned Sunni fears of a plot by Iraq’s Shia ruling parties to marginalise them again ahead of the vote. 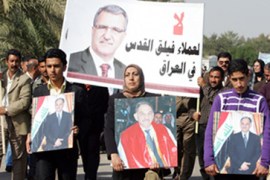 ‘Iraq could sink into violence’

Al Jazeera talks to an Iraqi lawmaker banned from running in upcoming elections.