In its ruling next Friday the court will decide whether or not Thaksin’s assets in the country were obtained through corrupt means and should be confiscated by the authorities.

Stripping Thaksin of his fortune – which mostly came from his career in the telecommunications industry before he entered politics – would deny him the means to finance any political comeback.

Thaksin’s assets in Thailand were frozen in the months after the coup and a court ruling against him next Friday could provoke more mass protests from his followers.

The US, British, Australian and other foreign embassies in Bangkok have issued advisories warning their citizens to stay away from mass political gatherings in case violence erupts.

The target of Friday’s protest was General Prem Tinsulanonda, who the Red Shirts say was a key leader in the 2006 military coup that forced Thaksin from power.

Thaksin was convicted in absentia on charges of conflict-of-interest in 2008 and sentenced to two years in prison.

He currently lives in exile in neighbouring Cambodia.

Prem is the president of the Privy Council, which advises the Thai king, and also serves as an adviser to the Bangkok Bank, one of the largest in Thailand.

The Red Shirts say that Prem helped arrange financing through the Bangkok Bank for a golf course that encroached on the Khao Soi Dao Wildlife Sanctuary in southeastern Thailand.

Prem has denied the allegations.

Thailand has been gripped by pro-Thaksin and anti-Thaksin protests for more than three years. 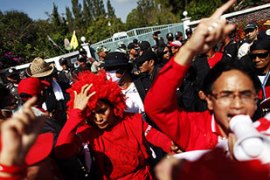