Lieutenant-General Hamid Gul was a military commander in the Pakistani Army in the 1980s, and served as the head of the country’s Inter-Services Intelligence (ISI) agency from 1987 to 1989.

But Gul’s rise to fame came during the Pakistan-Saudi-US effort to keep funds and logistical support flowing to the Afghanistan mujahidin, who were eventually credited with defeating Soviet military and political forces.

During the Bush administration, the US sought to put Gul on a UN list of international terrorists but their efforts were blocked by the Chinese delegation.

Domestically, Gul has been an outspoken opponent of Asif Ali Zardari, the Pakistani president, and has called for the Supreme Court to be reinstated as the rule of law in Pakistan.

Al Jazeera interviewed Gul during a short visit to Doha.

Al Jazeera: You recently said ‘the Taliban is the future, the Americans are the past in Afghanistan’. Isn’t that a little far-fetched?

Hamid Gul: The Americans are defeated. It isn’t necessarily because their firepower and their might has weakened, but it is because their own people are sick and tired [of engagement in Afghanistan]. There is fatigue now, fatigue is the threat and is the worst thing for a nation to suffer from. There is no way that the Americans can hold on to Afghanistan.

Could that lead to [Afghanistan President] Hamid Karzai’s government being toppled?

Karzai is no more. He is now fighting for his life. They have already started telling him that by the end of this year he will have to shoulder the responsibility of security in Afghanistan. But what are they giving him for this? Nothing at all. In fact, more civilian casualties in military operations are going to weaken Karzai’s position.

Some in Afghanistan believe that the extent of civilian casualties has empowered the Taliban’s resurgence.

It is not only that. While the civilian casualties have certainly made the Taliban a popular movement in Afghanistan – some 80 per cent of the population support them – the people of Afghanistan are fed up with corruption.

They are sick of the influence of warlords and drug barons, and the continued American occupation.

If it was a shot stint – come in and get out after completing the job – the situation would have been different. But the Americans didn’t do that. If they wanted to disperse al-Qaeda, they succeeded after the first year, and after that they should have pulled out. The fact they stayed on betrays their real intentions in Afghanistan until Barack Obama, the US president, came and started talking about withdrawal.

It was only last December that Obama announced that the US will pull out of Afghanistan. Hillary Clinton said the same thing, but there is a dichotomy.

On the one hand they say ‘We are not here to stay in Afghanistan’, but on the other hand they carry out surges and want to prop up and build the Afghan Army.

However, they don’t give the money to build the Afghan Army – just $140mn. Compare this to how much it costs the US to keep just one soldier in Afghanistan – $1mn dollars per soldier per year in Afghanistan. They have now about 68,000 US troops. It is currently costing them $65bn just to maintain these troops. There are another 30,000 US troops now coming, so it will cost the US $100bn a year to maintain its forces in Afghanistan.

The US is a heavily indebted nation so how are they going to afford this? Some 57 per cent of Americans in the polls say they don’t like this war and want their boys to return home. The Americans can’t take casualties, that is their problem. To compensate, they started employing security contractors, some 104,000 security contractors currently in Afghanistan.

What does this mean? Mercenaries to be used where troops cannot be deployed? We have already seen what mercenaries did in Iraq. The Americans are more and more inclined – because the US military cannot suffer casualties – to employ mercenaries, not just from the US but also from the local population.

This is a very dangerous trend if we are to believe that mercenaries can win wars and carry forward the political objectives of the country. This means that whoever has more money can employ more mercenaries, win wars, win territories, etc.

Given everything you have just said, how do you think the latest US and Nato offensive against the Taliban is going to play out?

The cold winds from the steppes of Central Asia sweep these regions. When you launch such military operations, the people are inevitably dislodged and their fields abandoned. In this situation, what are the Americans trying to achieve – I don’t know.

From a strategic point of view, Pakistan’s involvement in Afghanistan has been seen as setting up a buffer, or deterrent, to India. But now that Pakistan has nuclear capability, how important is Afghanistan to Islamabad?

We want a friendly Afghanistan. We know India is playing havoc with us. The Pakistani Taliban are being sponsored by the Indian intelligence and the Mossad, by the way, to carry out their attacks in Pakistan. The Mossad is very active in Pakistan and they are providing all the guidance and technical support to the Indian intelligence. So, Pakistan has to have its back covered – no country can fight on two fronts.

No, that’s not the purpose Pakistan has in Afghanistan.

Is the failure to stabilise Afghanistan adversely affecting Pakistan’s own security?

Yes, indeed it is. The conflict is not just derivative of the failures of the Kabul government – that is a puppet government. The real cause of the conflict is the occupation of Afghanistan by the Americans. If they go out, and after such a time – post-US occupation, the OIC and the Muslim countries have to come in and play their part. Then Afghanistan can redeem itself.

I do not think that Afghanistan will be another Vietnam for the Americans because they have said they will pull out. Obama is a president who is very clear. In his State of the Union address, I think it was clear he was not addressing terrorism but instead focusing on such internal issues as healthcare, unemployment and debt servicing.

It appears he is more focused on the domestic front than foreign affairs. You can’t focus on both at the same time.

There has been a surge in violence in Pakistan since the exit of Pervez Musharraf, the former president. The Pakistani Taliban threaten towns and cities, and there are tensions between the PPP and MQM in key ports like Karachi. What is needed to stabilise Pakistan right now?

Political cleaning up of the mess. The rule of law must take root in Pakistan. Unfortunately, the more powerful among the politicians and generals, when it comes to their turn – whether by martial law or civilian democracy – they want to run the affairs of the country according to their own predilections and propensities. And that is where we go wrong.

The political institution has to be set right; the Supreme Court and Parliament must be empowered. Right now, all the power is vested under the 17th Amendment, which was an amendment to the constitution passed by the dictator Musharraf in 2003. This gave more power to the office of the president and the ability to bypass the constitution and remain in leadership irrespective of elections.

Asif Ali Zardari, the Pakistani president, now has that power and he is refusing to budge. So, the 17th Amendment has to go, Parliament has to be empowered, rule of law by the Supreme Court has to be established and the army must not interfere. Then things will begin to fall in place and we will take the right direction.

Do you think the US is helping Zardari stay in power because he is seen as co-operating in the so-called war on terror?

I think there is ambivalence in their position and they sometimes do criticise him. The American press has in the past bashed Zardari, but it has gone quiet now. The Americans fear the return of the Supreme Court in Pakistan because it could rule that the US drone attacks are violations of the country’s sovereignty.

If that happens, Parliament would have to act on the Supreme Court’s decision and reverse the policy. The Americans are sceptical and suspicious that if the Supreme Court is given free reign in Pakistan, it is likely to rule against their interests and agenda in Pakistan.

Do you think the government will survive until the next national elections?

The government will survive but I am almost certain Zardari will not. I do not want to appear to be clairvoyant, but I doubt Zardari has many days left in government.

In recent years, US officials have accused you of having close ties with the Taliban and al-Qaeda. How do you respond to that?

No, this is wrong, I have no such ties. As far as al-Qaeda is concerned, I simply say come up with the evidence for 911. You haven’t even charged Osama bin Laden so far, that means you don’t have hard evidence against him. The full story is yet to come out.

In my opinion, all this is a gimmick, an inside job.

But since the Taliban are representing the national spirit of resistance, I have given them my voice. The Americans sent my name to the UN Security Council to put me on a sanctions list and declare me an international terrorist. But they failed because the Chinese knew the truth well and blocked that move.

Basically, the Americans have nothing against me. I saw the charges and I replied to them in the English-language press in Pakistan. I said if they have anything against me to bring it forward, put me on trial. Tell me what wrong I have done. I have been taking moral stands. The Americans talk of freedom of speech, but apparently my speech hurts them because it counters their excesses.

But Zardari once told a western journal that you are a “political ideologue of terror”.

I wrote a letter to Zardari that I am an ideologue of jihad, which is common between us. He is a Muslim like me and believes in the Quran. Terror is a totally different thing. I do not support terror at all, but jihad is our right when a nation is oppressed. According to the United Nations Charter, national resistance for liberation is a right. We call this a jihad. 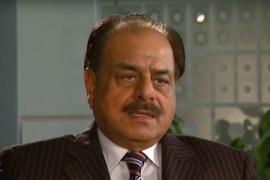 The former head of Pakistan’s intelligence agency – ISI – in conversation with Al Jazeera. 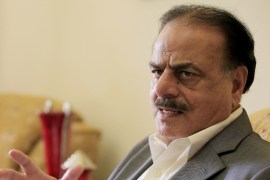 Hamid Gul, who was instrumental in the formation of the Taliban, died of brain haemorrhage at the age of 79.