Tymoshenko has said that observers from the Organisation for Security and Co-operation in Europe (OSCE) are willing to testify in court about the alleged fraud.

However, Joao Soares, the head of the OSCE team of election observers in Ukraine, has denied that his group had any information or evidence of vote-rigging.

The political standoff between the two rivals threatens to disrupt the new government, with Tymoshenko refusing to concede to Yanukovych’s calls for her to step down from the premiership.

Tymoshenko’s bloc in parliament on Tuesday boycotted the vote setting the date of Yanukovych’s election.

The vote passed after 238 deputies voted in favour, just over the minimum of 226 required.

Yanukovych’s supporters in his Regions Party are trying to build a coalition so it can force a vote of no confidence in Tymoshenko, potentially forcing her into opposition.

Meanwhile, at a bitter news conference on Tuesday, Viktor Yushenko, the outgoing president, hit out at both Yanukovych and Tymoshenko, his former partner in the so-called Orange Revolution that brought him to power in 2004.

“It [the election] is a defeat for Ukraine’s European course,” Yushenko, who secured just six per cent of the vote in the first round of polling, said.

“The victory of Yanukovych is a Kremlin project. It is a policy of deep dependence on Russia.”

Yushchenko heavily criticised Yanukovych’s plans to give Russia a stake in managing Ukraine’s natural gas pipelines and to extend the lease it has on a Black Sea naval base.

“It is painful and demeaning for me to hear these pledges. It discredits us as a nation, as Ukrainians,” he said.

Yushchenko has fought bitterly to force out Russia out of the port at Sevastopol. He called Yanukovych’s pledge to allow the fleet to stay a “policy of being colonised”.

In a statement, Yanukovych responded to Yushchenko’s attack with a pledge to pursue a balanced and pragmatic foreign policy.

“I can only say one thing to anyone who expects my presidency to weaken Ukraine – don’t count on it,” he said. 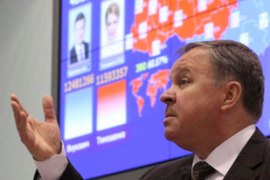 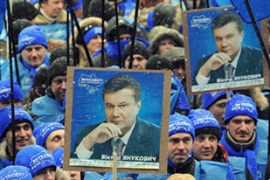 Yulia Tymoshenko says her rival’s victory in presidential run-off was not legitimate. 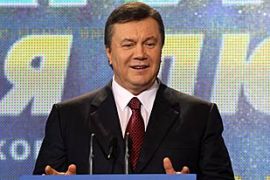 Call for Ukraine PM to resign