The report comes amid a flurry of diplomatic activity and visits, suggesting a renewed push to revive the stalled six-party nuclear disarmament negotiations hosted by China.

A meeting between the Kim and US officials would send a strong signal that efforts to get the disarmament talks back on track were gaining traction.

It could also signal a thaw in relations between the US and North Korea, wartime rivals that do not have diplomatic relations.

Earlier, the US state department said US officials had not ruled out future meetings with the North Koreans.

PJ Crowley, a state department spokesman, however said that Washington believed future talks should take place within the six-nation framework.

“We believe firmly that the next meeting that US representatives and others should have with North Korea is through a formal six-party meeting,” he told reporters.

The rush of diplomacy raised hopes of a breakthrough on restarting the negotiations after Kim Jong-il assured a high-level Chinese envoy on Monday that his government is committed to a nuclear-free Korean peninsula.

South Korea, Japan and the US have all urged the North to return to the disarmament talks and show progress on denuclearisation before any discussions on a peace treaty or sanctions.

But this week’s meetings in Beijing have been hard going, according to reports, with Pyongyang sticking to its demands that UN sanctions be lifted before it rejoins the nuclear dialogue.

The North also wants US agreement to hold talks about a formal peace treaty before it comes back to the six-party talks.

The negotiations, hosted by Beijing, bring together envoys from China, Japan, Russia, the US and North and South Korea.

Yonhap said Wu Dawei, China’s chief nuclear negotiator who has been meeting Kim, plans to travel to other six-party member nations after the lunar new year celebrations this weekend, adding that the two sides were trying to narrow differences on economic assistance.

Speaking to reporters on Thursday about the meetings, Kim said he and Wu shared a “deep exchange of views … on issues of interest, including China-North Korea relations, signing of a peace treaty and resumption of the six-party talks”.

Meanwhile Lynn Pascoe, the political advisor to Ban Ki-moon, the UN secretary-general, is due to conclude a mission to North Korea on Friday aimed at reviving the nuclear talks. 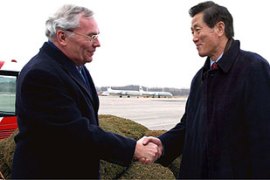 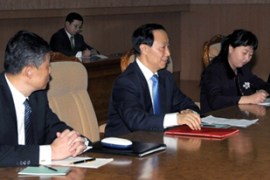 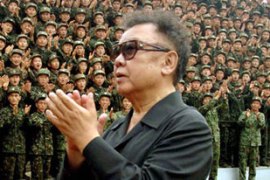 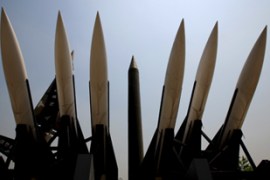