The boycott demand did not dissuade film goers however, with tickets at the multiplexes that screened the first showings of the film reportedly selling out within hours.

“I came to see the movie because it’s been so controversial, and because I am a huge fan of Shahrukh Khan,” Subhash Kandrep, who was queueing outside one of the cinemas, was reported by the Reuters news agency as saying.

“I don’t see why a movie should not be shown just because some people are protesting over what Khan said.”

Shiv Sena mounted its protests after recent comments by Khan that Pakistani players should have been chosen to participate in the Indian Premier League Twenty20 cricket tournament to be held next month.

Manohar Joshi, a senior Shiv Sena leader, who led a group of supporters to a film theatre, said that Shiv Sena would allow screenings but only after Khan apologises.

Khan, who is Muslim, has refused to do so.

Khan’s new film is set in the US against the backdrop of the September 11 attacks on New York and traces the journey of a Muslim man who suffers from Asperger’s syndrome. 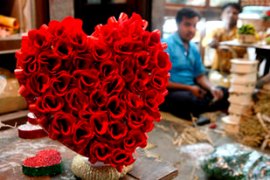 Jai Bhagwan Goyal, president of the New Delhi chapter of the Shiv Sena, has warned that Pakistan will face “ferocious” protests when they play in India next week in the Champions Trophy.