Clinton, 63, who is married to Hillary Clinton, the US Secretary of State, underwent quadruple bypass surgery in 2004 to clear four blocked arteries.

Hillary Clinton, who had been due to leave on Friday for a trip to the Middle East, was expected to leave Washington for New York early on Thursday to be with her husband, a State Department official said.

She is now reported to have pushed her Middle East tour back by a day.

During his time as president, Clinton became known as an unhealthy eater, with a fondness for hamburgers and piles of french fries.

However, friends and family say he changed his eating habits after his 2004 bypass.

Leaving office in 2001 after serving two terms in the White House, Clinton has shown little sign of slowing down.

Most recently in his role as UN special envoy to Haiti the former president has played an active role in mobilising aid to the Caribbean nation following last month’s deadly earthquake.

Last week he paid a second visit to Haiti in a bid to get aid moving to quake survivors.

During his visit he apologised for the slow arrival of relief supplies, but the former president rejected suggestions he had in effect become governor of Haiti, with which he has had long ties.

“What I don’t want to be is the governor of Haiti. I want to build the capacity of the country to chart its own course,” he said.

Terry McAuliffe, the former chairman of the Democratic National Committee and a close friend of the Clinton family, said the former president had taken part in a conference call on earthquake relief as he was being wheeled into surgery.

McAuliffe said he expected Clinton to be released from hospital on Friday. 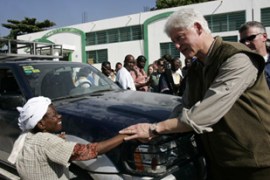