Iran announced on Tuesday that it was beginning to further enrich its uranium stockpile so that it could be made into fuel rods for use in a medical research reactor in Tehran.

John Large, a independent nuclear engineer, said that it was simply not possible for Tehran to have completed the 20 per cent enrichment of any of its stockpile in such a limited time.

“Even to produce tiny amounts, representative amounts, of uranium enriched to 20 per cent would be an impossible task,” he told Al Jazeera from London.

“For Iran to actually move to a 20 per cent enrichment  would mean it would have to devote its somewhat limited enrichment facilities and the gas facilities it requires to prepare for that.

“You can’t have a complex material manufacturing process like this and suddenly change the policy at whim.”

Mohammad Marandi, a professor of political science at Tehran University, said he was “pretty confident” that Ahmadinejad’s announcement was truthful.

“Every time in the past that Iran has made an announcement in Western circles many experts in the West have been sceptical,” he said

An International Atomic Energy Agency memo released on Wednesday, however, also appeared to cast doubt on Ahmadinejad’s claims, saying that its efforts were only modest at the moment.

The memo from Yukiya Amano, the IAEA chief, said Iran had recalibrated just 164 centrifuges, out of its 8,000 enrichment machines, for higher-scale enrichment at its Natanz plant.

“On Wednesday, when agency inspectors arrived at the pilot plant, they were informed that Iran had begun to feed the low-enriched uranium into one cascade the previous evening for [test] purposes,” the memo said.

A cascade is 164 centrifuges hooked up in series that spin and respin uranium gas to the required enrichment level.

The document, relying on onsite reports from IAEA inspectors, also cited Iranian experts at the enrichment site at Natanz as saying that only about 10kg of low enriched uranium out of 1.8 tonnes, had been fed into the cascade for further enrichment.

Iran’s move to further enrich it uranium has received an angry response from the United States and its allies, with Washington pushing for fresh sanctions against Tehran.

But Ahmadinejad repeated his insistence that Iran’s nuclear programme was not aimed at producing a nuclear weapon.

“If we wanted to manufacture a bomb, we would announce it … our nation has the courage to explicitly say it and build it and not fear you.,” he said.

A nuclear bomb requires uranium of about 90 per cent purity, but nuclear experts say getting to 20 per cent is a big step because low-level enrichment is the most time-consuming and difficult stage of the process. 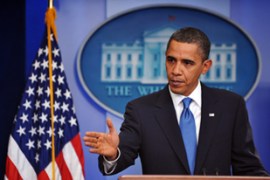 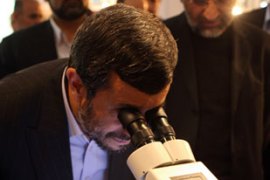 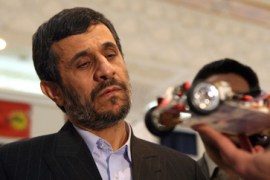 US and France lead calls for sanctions as Tehran says it will step up uranium enrichment. 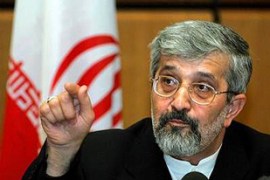 France and US say sanctions only option after Iran says it will step up uranium enrichment.