Athens will need to borrow around $75bn this year to cover its deficit and refinance debts.

The precise details of what support might be offered will be discussed at a meeting of the Eurogroup, the forum for the 16 eurozone finance ministers, in Brussels on Monday.

Jean-Claude Juncker, the chairman of the forum, held a videoconference with other ministers to discuss rescue plans on Wednesday.

“I am holding lots of meetings right now to work towards a response which will convince the financial markets,” he said in an interview with the Luxemburger Wort newspaper.

Among the possible options are bilateral loans to Greece from some eurozone countries, the creating of credit lines, or government guarantees to underwrite Greek bond issues, the AFP news agency quoted a diplomatic source as saying.

Concerns over the Greek debt and other weak European economies made the euro reach an eight-month low against the US dollar last week.

It is believed that other eurozone nations may prefer to help Athens rather than have it go to IMF, which could further damage confidence in the euro.

“It is not just the Greek economy that is in trouble, Spain and Portugal have rising unemployment and spiralling national debt,” Al Jazeera’s Macdonald said.

But Elena Salgado, the Spanish finance minister, said those concerns are unjustified.

“The Greek economy is very different to the Spanish economy,” she told Al Jazeera.

“We have done a lot of investment in the last 10 years … Our financial system is very sound. Our statistics are credible and correct. So our situation is not the Greek one.”

Greece debts that are expected to reach nearly $400bn this year.

The cost of servicing that debt has risen as bond markets have punished Greece for its financial profligacy, pushing yields higher.

Athens has announced drastic spending cuts in an attempt to bring the situation under control, but these have sparked anger among Greek workers. 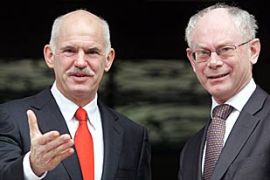