Once the room, named Tranquility, and its attached glass domed lookout are bolted in place, the space station will be 98 per cent complete.

The first of three scheduled space walks to install the new modules will take place on Thursday.

Tranquility, named after the Apollo 11 moon landing site, will house life-support and exercise equipment, and a toilet.

The domed observation port, known as the Cupola, includes the largest window ever deployed in space, measuring 80 centimetres in diameter.

As well as scientific benefits and being an aid to construction and maintenance on the space station, Nasa says the new window will also have important psychological benefits for the crew – enabling them to maintain a visual connection with Earth during long missions in space.

Endeavour blasted off on Monday from the Kennedy Space Centre in Florida in what mission controllers said was the shuttle’s final night launch.

Nasa has plans for just four more shuttle flights before the three vehicles in the shuttle fleet are retired.

After that, the agency will have no manned spaceflight capability and will have to rely on renting space on Russian Soyuz capsules as the only way to transport its astronauts to and from the space station.

What vehicle will replace the shuttle remains unclear.

Nasa had originally planned the Orion capsule, scheduled to come online around 2015, as the next generation of spacecraft as part of its Constellation programme.

But last month the Obama administration announced it was scrapping Constellation in favour of more cost-effective space projects.

As part of the revised Nasa budget, officials said they would be looking to provide incentives for greater private sector involvement in designing and building future spacecraft to carry US astronauts. 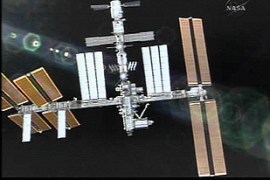