“The broader charges were that he engaged with political leaders and political parties that were working against the government,” Keheliya Rambukwella, a defence ministry spokesman, said on Tuesday.

Fonseka was defeated by Rajapaksa at the polls on January 26, with a result of six million votes to four million.

The retired general accused the government of rigging the election and vowed to challenge the result in the Supreme Court.

But with just one week left to file the relevant legal papers, supporters of Fonseka say military police stormed the offices of the opposition alliance in Colombo which had backed his candidacy on Monday night and “dragged him” away.

Anoma Fonseka, the defeated presidential candidate’s wife, is accusing the government of abducting him and treating him “like an animal”.

“He’s the man who rescued Sri Lanka from the culture of terrorism and I can’t believe they’re doing this type of thing to him – I don’t know what type of law exists in this country,” she said on Tuesday.

“We always knew that the government will try to arrest my husband, but we never thought they would do it in such a disgusting manner.”

In an official statement, the government said that the former army chief was “hell-bent” on betraying the country’s “gallant armed forces”.

It cited as evidence the general’s remarks on Monday that he would be ready to give evidence in an international court on war crimes charges against the state.

More than 7,000 civilians were killed in the final months of the fighting that crushed the rebels last May.

Human rights groups have accused the military of shelling hospitals and heavily populated civilian areas during the fighting, and the rebels of holding the local population as human shields.

A US state department report has also accused both sides of possible war crimes, and the issue remains a sensitive subject for the government.

Many credit Fonseka with winning the war against the separatist Liberation Tigers of Tamil Eelam, but he fell out with Rajapaksa soon after and the pair fought a bitter election campaign.

Earlier this month, Rajapaksa sacked a dozen senior military officers described by the defence ministry as a threat to national security. More were arrested from Fonseka’s office. 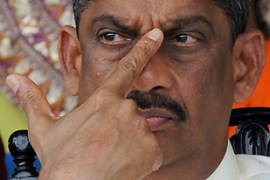 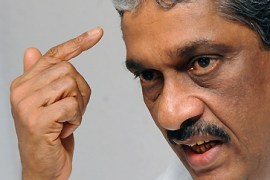 President’s rival to be charged with “fraudulent acts and other military offences”. 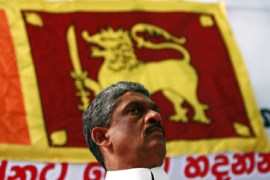 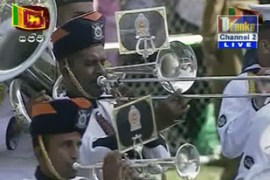