Amnesty International has urged the Malaysian government to ban caning in prisons, saying the practice has reached “epidemic proportions” that amount to torture.

The organisation said the punishment, which rips into the victim’s naked skin, is being used for immigration violations, meaning thousands of migrant workers, refugees and asylum seekers are being subject to it.

“It’s intentionally inflicting severe pain and suffering – it fits the international definition for torture – something that’s prohibited under any circumstances,” Lance Lattig, one of the authors of the report by Amnesty told Al Jazeera on Monday.

“According to our figures, more than 10,000 people are caned by authorities in Malaysia annually and this number is actually a conservative estimate,” he said in a separate statement.

He said the practice was introduced by British colonial authorities prior to Malaysia’s independence in 1957 but that most former colonies had abandoned it.

“It exists as a residue of an extremely brutal form of Victorian punishment that exists in very few other places,” he said.

Malaysia’s government says the practice is a legal and effective deterrent against criminal activity.

But a high level official told Amnesty that the punishment did not stop drug users or refugees, Lattig said.

Amnesty’s report detailed how “specially trained caning officers tear into victim’s bodies with a metre-long cane swung with both hands at high speed”.

“The cane rips into the victim’s naked skin, pulps the fatty tissue below, and leaves scars that extend to muscle fibre.

“The pain is so severe that victims often lose consciousness. Blood and flesh splash off the victim’s body, often accompanied by urine and feces,” it said.

The Malaysian government trains officers how to conduct caning and pays them a bonus for each stroke, the report said.

It added that prison officers were given financial incentives for caning prisoners, being paid a bonus for each stroke, in some cases allowing officers to double their income.

“Others take bribes to intentionally miss, sparing their victims,” it said.

The report said many of the foreigners sentenced to caning did not get legal representation or understand the charge.

“They don’t tell you what day you’ll be whipped. You just know your number is coming closer,” Amnesty quoted a Malaysian caned for heroin possession as saying.

The caning is administered under criminal laws that are separate from Malaysia’s Islamic laws, which also prescribe whipping for religious offences. 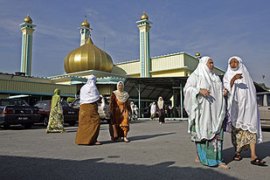 Muslim woman who says she drank beer given community service after sultan intervenes.

Muslim authorities order punishment under Islamic law in first such case in the country. 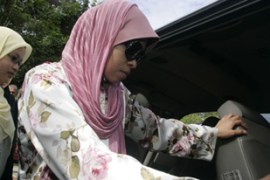