A French court has found Continental Airlines “criminally responsible” for the July 2000 crash of supersonic airline Concorde that killed 113 people.

The airline, now United Continental Holdings following a merger, was ordered on Monday to pay Air France, which operated the Concorde flight, $1.4m for damaging its reputation, as well as a $265,000 fine.

John Taylor, a mechanic for the airline, was also found guilty of involuntary manslaughter, and handed a 15-month suspended jail sentence and ordered to pay a $2,650 fine.

However his supervisor and three French aviation officials, including the former head of the Concorde programme, were acquitted.

Continental has said it would appeal the verdict, with Olivier Metzner, a laywer for the group, saying that the ruling”only protects French interests”.

“Justice in France must be handed down in the name of the French people,” he said outside the court.

“This morning it was handed down in the name of French patriotism.”

Jacky Rowland, Al Jazeera’s correspondent at the court in Paris, said the costs Continental were ordered to pay on Monday were “just the start”.

“We can see efforts from Air France to recoup damages,” she said.

“But we can also expect to see families who did not accept that initial compensation from Air France, but who chose to put their trust in the court system, to pursue Continental Airlines direct for compensation as a result of the crash.”

The case, which started in February, had re-opened the debate over whether European engineers or Continental Airlines were to blame for the incident.

Flight 4590 to New York crashed into a hotel in a ball of fire just after take-off from Charles de Gaulle airport in Paris, the French capital, on July 25, 2000, killing all 109 people on board and four people on the ground.

The court ruled that the crash was caused by a small metal strip from a Continental DC10 plane, when fell onto the runway, puncturing the plane’s tyres and sparking a fire when the debris flew into the underwing fuel tanks.

Prosecutors had called for Continental Airlines to be fined $218,000 for manslaughter for its role in the crash, as well as demanding an 18-month suspended sentence for the company’s mechanic and his boss.

Continental had previously denied any wrongdoing, instead questioning the safety record of the ageing Concorde model as part of its defence.

Metzner said that Air France’s maintenance was negligent and the plane never should have been allowed to fly, saying that Continental had been made a convenient scapegoat.

The airline had called in witnesses who testified that the fire broke out before the plane reached the runway debris.

But the court said that “none of the evidence collected or witness testimony corroborates” the theory.

Ronald Schmid, a lawyer who has represented several families of the German victims on the flight, said he was “skeptical” about Monday’s ruling.

“It bothers me that none of those responsible for Air France were sitting in the docks,” he told the AP news agency.

Air France, which paid millions of dollars in compensation to families of the victims, has escaped blame from investigators looking into the disaster. 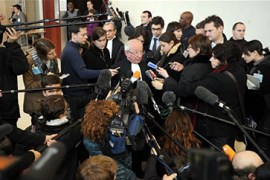 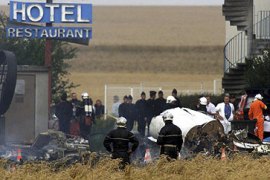