The UN secretary-general has offered to mobilise additional international help for Israel in its battle to contain massive forest fires that have engulfed the country’s north, and have killed at least 41 people.

Ban Ki-moon’s announcement comes after Turkey and Greece were among several countries to offer assistance, in response to an urgent appeal by Binyamin Netanyahu, the Israeli prime minister.

“This is a terrible tragedy,” Ban said in a letter to Netanyahu which was released by the Israeli mission.

The UN leader offered help “mobilising further support” from other United Nations members to battle the blaze on Mount Carmel which now threatens the port of Haifa.

“I am deeply saddened by the loss of life, suffering, human displacement and damage to nature,” Ban said.

He also praised the courage of Israeli emergency workers and the “generous international assistance” already sent.

A plane and a helicopter from Cyprus and two British helicopters have been sent to help fight the enormous blaze from above, while a group of Jordanian firefighters tackled the flames on the ground.

The aircraft repeatedly swooped over Israeli forests, dumping tonnes of sea water onto the flames below, but officials say the blaze was still out of control more than two days after it started

Israel, which has a formidable air force, has no firefighting aircraft of its own.

The largest fire in the country’s history scorched more than 7,000 acres of drought-afflicted land, destroyed houses and revealed dramatic shortcomings in the country’s ability to tackle such an emergency.

More than 13,000 people have been evacuated following the disaster.

Israel has only 1,500 firefighters, a number widely accepted as inadequate for a country of 7.6 million people.

Al Jazeera’s Tony Birtley, reporting from the outskirts of Haifa, said that some residents are returning to their homes.

“Despite the continued threat, some are returning, but the authorities are trying to convince them to leave, and some are even being forced to leave,” he said.

Major General Nachustan, who is heading co-ordinating international rescue efforts, said he hoped the planes “will be a significant contribution to the fight against the fire”.

“These are airplanes that have the capacity which we don’t have in this country and we hope to put them into operation very soon.”

It was not immediately clear what started the huge fire, but police said on Friday that arson was suspected in two smaller fires that were burning nearby.

Israel has experienced unseasonably hot weather for months and it was the driest November in 60 years. 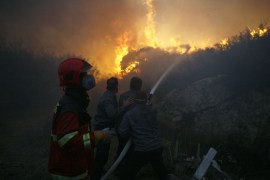 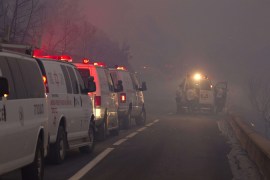