A lawyer for Mikhail Khodorkovsky has appealed his client’s sentence of six more years in prison, after the former Russian oil tycoon was convicted of money laundering and embezzlement.

He had his prison sentence extended to a total of 14 years, and Karinna Moskalenko, Khodorkovsky’s lawyer told the Associated Press on Friday that she launched the appeal on the final work day before a 10-day New Year vacation.

She also said Khodorkovsky’s conviction on charges of stealing almost $30bn worth of oil from his company and laundering the proceeds was marred by procedural violations.

“The verdict has nothing to do with justice,” she said.

The ruling drew strong condemnation from the US and European governments, who called it evidence of the use of Russia’s judicial system for political ends.

“Russian courts are independent from both Russian and foreign governments,” he said.

However, Mikhail Fedotov, the head of human rights council in Russia, said it would likely form a panel to study the verdict.

He said it would report its conclusions to Dmitry Medvedev, the president, but would only release its
findings after the appeals run their course.

Moskalenko said she had expected the guilty verdict and has little hope for success of her appeal, but added that it is necessary to use every opportunity in Russia before turning to the European Court of Human Rights.

The judge sentenced Khodorkovsky to six more years in jail, as prosecutors had demanded, making the total time spent behind bars 14 years. The judge said the new term will be counted from his 2003 arrest and end in 2017.

The defense has said the charges reflected a lack of understanding of the oil business, including the payment of transit fees and export duties.

Numerous witnesses, including current and former government officials, testified that Khodorkovsky could not have stolen what amounted to almost all of the oil Yukos had produced.

The charges also contradicted the first trial, in which Khodorkovsky was convicted of evading taxes on Yukos profits.

His eight-year sentence in that case had been set to end in 2011. 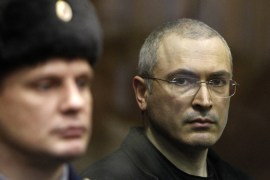 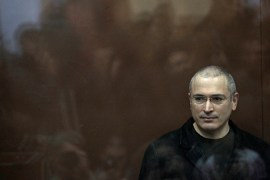 Once one of Russia’s richest men, the former oil tycoon fell from grace when he sponsored political opponents of Putin. 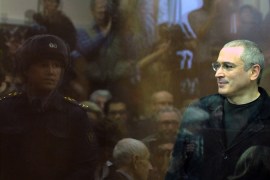