Four people have been killed and injured 13 in an explosion at a beer garden in Nigeria’s capital Abuja, state television has reported.

The blast occurred in the Sani Abacha army barracks, a busy area where people meet to eat and shop.

The base includes market stalls and beer parlours referred to locally as a “mammy market”.

A local police spokesperson said the blast occurred at 1830 GMT on Friday.

A witness said he was approaching the market to join New Year’s Eve celebrations when he heard the explosion.

“People ran in different directions. There were scores of bodies – dead and wounded. They used army trucks to pack them away,” Eric, who regularly uses the market, said.

Goodluck Jonathan, the Nigerian president, has said that a “faceless” group is responsible for the attack.

He has linked it to bombings on December 24 in the central city of Jos, which sparked a week of violence.

At least 80 people were killed in ensuing violence between Christian and Muslim residents.

An anchor on the state-run Nigerian Television Authority gave a death toll of 30 to viewers Friday night.

But a local police spokesman immediately disputed the figure, saying four people had died and 13 were wounded.

Al Jazeera’s Yvonne Ndege, reporting from Abuja, said the attack had struck people who had gathered for dinner and drinks to welcome the new year.

“When the explosion ripped through the market, as you can imagine, it sent people scattering,” she said. “Now the question really is … what could’ve motivated this attack, who could’ve been behind it”.

The military have been “extremely guarded” in what information they have so far released about the attack.

While some point the finger at Boko Haram, others believe that the bombing may be connected to the Movement for the Emancipation of the Niger Delta, which claims to be fighting for a Nigeria to have a greater share of its oil wealth, Ndege said.

A police spokesman said on Friday that Boko Haram, which is thought to oppose Western education and culture, was behind the deaths of at least 16 people in three attacks this week in Maiduguri, the capital of Borno state.

Nigeria was also rocked by car bomb attacks in Abuja in October, for which responsibility was claimed by a group opposing the government in the oil-producing Niger Delta, where there has been a recent resurgence in violence. 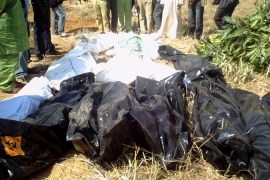 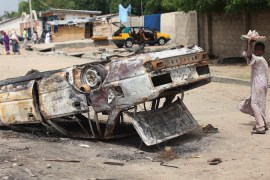