Tens of thousands of refugees from Cote d’Ivoire have fled over the border into neighbouring Liberia amid rising tension following last month’s disputed presidential elections.

The fresh wave of Ivorian refugees comes on top of the 14,000 people who already registered with the UNHCR in eastern Liberia last week.

“With their numbers growing, the humanitarian needs are increasing for the mostly women and children refugees as well as for the villagers hosting them,” the UN agency said, adding that it was preparing for more than 30,000 refugees.

The exodus came as ECOWAS, the West African regional bloc, made efforts to try to persuade Laurent Gbagbo, the incumbemt president, to step down from the presidency after losing the November 28 runoff vote.

But the firebrand leader of Cote d’Ivoire’s “Young Patriot” movement said on Wednesday that a military intervention, one of the options ECOWAS is said to be considering, would be “suicide” for the entire continent.

Charles Ble Goude was greeted by a cheering crowd of about 2,000 supporters when he arrived in Abidjan’s district of Yopougon.

Shortly after his arrival, he said the government was seeking a peaceful solution to the current crisis.

“Nobody wished for this to happen but this post electoral crisis which today blocks Ivory Coast is challenging Africa to try and find a political solution to this political crisis,” Ble Goude said.

The runoff vote that pitted Gbagbo against his rival Alassane Ouattara was meant to reunite Cote d’Ivoire, the world’s top cocoa grower, after the 2002-03 civil war.

However, a dispute over the results has provoked clashes that have killed more than 200 people.

Provisional election commission results showed Ouattara with an eight percentage-point victory but the figures were quickly overturned by the country’s top court, run by a Gbagbo ally, over allegations of fraud.

West African leaders have threatened to remove Gbagbo by force if he refuses to go quietly, but are likely to rely on persuasion rather than arms to get their way.

“The military road is the road to suicide for all Africa. We don’t wish that. I hope that wisdom will win in all camps and that aside from the emotions we will be able to see the interests of all of Africa,” Ble Goude said at the rally.

“We want to find a solution for this crisis but as we’ve been saying since 2002 it’s not a military solution. There’s only the negotiations way. That’s what we wish for.”

Gbagbo has shown no sign of giving in to the international pressure and has accused former colonial power France of orchestrating an international plot alongside the United States to get him out.

The French government, which has a military base in the country, dismissed the allegations as groundless.

The US has started planning for the possible evacuation of its embassy in Cote d’Ivoire, the state department said.

Mark Toner, a spokesman, said a team of eight Pentagon officials is now in Abidjan to weigh the US options, including evacuating embassy personnel.

“They are looking at contingencies,” he said, adding that in the event of widespread unrest, evacuations “would be normal and prudent”.

He also repeated US calls for Gbagbo to step down and said he should control his supporters.

In a related development, the Washington lobbyist hired by Gbagbo’s government resigned abruptly on Wednesday.

Lanny Davis, in a letter obtained by The Associated Press new agency, cited the refusal “to allow president Barack Obama’s call to be put through to Mr. Gbagbo, despite my repeated objections to that decision”.

Davis said he has not been able to reach Gbagbo directly to offer him this advice, despite repeated requests.

Youssoufou Bamba, the country’s new UN ambassador appointed by Ouattara, said that Cote d’Ivoire is “on the brink of genocide”.

Bamba made the remarks after presenting his credentials to Ban Ki-Moon, the UN secretary-general, on Wednesday, making him the first Ouattara government envoy to assume a diplomatic post since last month’s poll.

“The situation is very serious,” Bamba, 60, told journalists after meeting with Ban in New York.

“Houses have been marked according to your tribe. What will be next? Something should be done.”

A spokesman for Gbagbo said that the government would cut off diplomatic ties with countries that recognise ambassadors named by Ouattara.

The EU has said that it will tighten sanctions next month against Gbagbo, expanding a list of his supporters to be targeted, diplomats said on Wednesday.

Representatives of the 27 EU governments meeting in Brussels agreed to impose additional measures and to expand the number of Gbagbo supporters targeted by travel restrictions and asset freezes from 19 to 61.

Efforts to settle the dispute in Cote d’Ivoire diplomatically continued on Wednesday, with Jorge Borges, the Cape Verde foreign affairs secretary, saying that the option of a military intervention by ECOWAS was off the table for the moment.

His statement came after the presidents of Benin, Sierra Leone and Cape Verde briefed Goodluck Jonathan, the Nigerian president and current ECOWAS chairman, on their talks with Gbagbo on Tuesday.

The presidential delegation had delivered an ultimatum to Gbagbo to step down as leader or face removal by force.

Gbagbo has until January 3, the date of the next meeting, to respond. 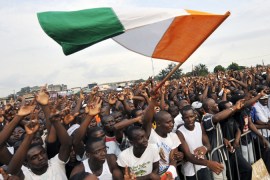 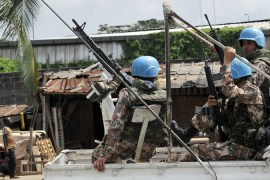