Cote d’Ivoire is “on the brink of genocide,” according to the country’s new UN ambassador appointed by Alassane Ouattara, who is viewed by the UN, European Union, US and African Union as the winner over incumbent Laurent Gbagbo following last month’s presidential election.

Youssoufou Bamba made the remarks after presenting his credentials to Ban Ki-Moon, the UN secretary-general, on Wednesday, making him the first Ouattara government envoy to assume a diplomatic post since the November 28 poll.

Bamba warned that the tug-of-war over the presidency was pushing the West African country to “the brink of genocide”.

“The situation is very serious,” Bamba, 60, told journalists after meeting with Ban in New York.

“Houses have been marked according to your tribe. What will be next? Something should be done.”

A spokesman for Gbagbo said that the government would cut off diplomatic ties with countries that recognise ambassadors named by Ouattara.

The EU has said that it will tighten sanctions next month against Gbagbo, expanding a list of his supporters to be targeted, diplomats said on Wednesday.

Representatives of the 27 EU governments meeting in Brussels agreed to impose additional measures and to expand the number of Gbagbo supporters targeted by travel restrictions and asset freezes from 19 to 61.

Efforts to settle the dispute in Cote d’Ivoire diplomatically continued on Wednesday, with Jorge Borges, the Cape Verde foreign affairs secretary, saying that the option of a military intervention by the West African regional bloc ECOWAS was off the table for the moment.

His statement came after the presidents of Benin, Sierra Leone and Cape Verde briefed Goodluck Jonathan, the Nigerian president and current ECOWAS chairman, on their talks with Gbagbo on Tuesday.

The presidential delegation had delivered an ultimatum to Gbagbo to step down as leader or face removal by force.

Gbagbo has until January 3, the date of the next meeting, to respond.

“Whenever there is a dispute, whenever there is disagreement, it is dialogue that will solve issues,” Jonathan said in the Nigerian capital, Abuja, where ECOWAS is based.

“The dialogue is on. They are encouraging us to go back.”

Meanwhile, military chiefs of West African countries continued their talks on the crisis in Cote d’Ivoire on Wednesday, Abde-Fatau-Musah, the ECOWAS director for external relations, said.

The talks covered “the military planning … and the logistics” of any military operation, he said.

Last week, the 15-nation ECOWAS group vowed to use “legitimate force,” if necessary, to ensure that Gbagbo steps down.

While Gbagbo’s government had initially adopted a conciliatory tone ahead of the meeting with the three West African presidents on Tuesday, that message seems to have changed.

Charles Ble Goude, Gbagbo’s minister for youth and employment, vowed on Wednesday to “liberate the Golf Hotel [Ouattara’s headquarters] with our bare hands” on January 1.

Shortly after Tuesday’s meeting, a Gbagbo government spokesman asserted that international intervention by force would not be tolerated.

Nevertheless, a Ouattara adviser told the AP news agency that Gbagbo had demanded a vote recount during the meeting with the presidential delegation, as well as amnesty should he leave office.

Post-election violence has killed more than 200 people and threatens to tip the country back into civil war.

In a sign of mounting tensions, a crowd attacked a UN convoy on Tuesday, wounding one peacekeeper with a machete and setting fire to a vehicle, according to a statement issued by the UN mission in Cote d’Ivoire.

On Wednesday, the US state department said that a small US military team was in the commercial capital of Abidjan, studying the possibility of evacuating US citizens should the unrest in the country worsen.

Gbagbo has been in power since 2000 and had already overstayed his mandate by five years when the long-delayed presidential election was finally held in October.

While Cote d’Ivoire was officially reunited in a 2007 peace deal, Ouattara still draws his support from the northern half of the country, where many residents feel they are often treated as foreigners within their own country by southerners. 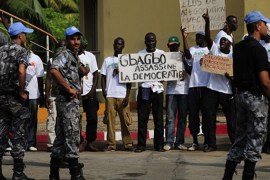 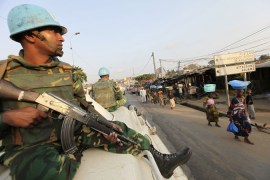 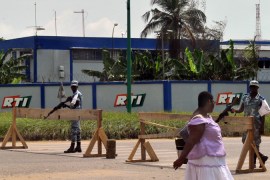