Cambodian authorities say seven Thais, including a member of parliament, have been arrested near the countries’ disputed border.

The seven, including Panich Vikitsreth, a Democrat Party lawmaker and members of the royalist so-called “Yellow Shirt” movement, were escorted by police to Phnom Penh’s Capital Court of First Instance on Thursday morning.

They are alleged to have illegally crossed the border into Cambodia.

Hun Hean, provincial police chief, said that the arrests occurred on Wednesday opposite the Thai province of Sa Kaew.

Abhisit Vejjajiva, Thailand’s prime minister, demanded their immediate release on Thursday, saying “Cambodia should not take this case to court as it will further complicate the issue”.

He said that the Thai foreign minister would travel to Cambodia to meet with his counterpart there later on Thursday for talks on the issue.

Cambodian Prime Minister Hun Sen said on Wednesday that the seven would be charged and put in jail to await trial.

The two countries have a long-standing dispute over their border, which is not fully demarcated.

It is also littered with landmines left over from decades of war in Cambodia.

The two countries have had strained relations following a series of deadly border clashes in July 2008, over land surrounding the 11th century Preah Vihear temple, after it was granted UN World Heritage status.

Suthep Thaugsuban, Deputy Thai premier, however, acknowledged that the seven Thais were on Cambodian territory when arrested.

“Panich and his entourage passed the border police checkpoint and border police followed them by car to ask them to return, but they were already on Cambodian soil,” he said. 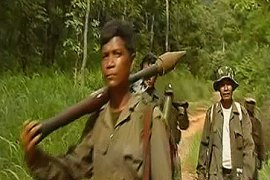 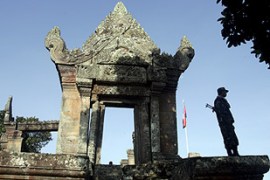 Officials in Phnom Penh angered by demarcation of disputed border with Thailand. 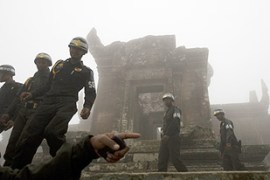