A snow storm that has covered major travel hubs in the northeastern US, continues to freeze travel plans, grounding flights and stranding buses and subway trains across the country.

Significant snow levels blanketed Virginia, Philadelphia, and Boston and northern New Jersey and New York, where hundreds of airline passengers were stranded for up to 10 hours on the tarmac at John F Kennedy airport on Tuesday.

Ambulances struggled to get patients through unswept streets of New York City – where the storm dumped as much as two feet of snow – and city buses sat abandoned.

Officials warned it could take until January 1 or later to rebook all passengers and straighten out the transport mess created by the bad weather, which shut down all three of New York’s major airports for 24 hours and caused a ripple effect of chaos throughout the country.

The three major area airports – JFK, LaGuardia  and Newark International in New Jersey – reopened on late on Monday, but the  cancellations of over 5,000 flights meant a huge backlog and more delays.

In general, US airlines operating domestic flights are not allowed to keep passengers waiting on the tarmac for more than three hours.

But the rule does not apply to international flights or foreign airlines.

Many passengers at JFK had been stranded inside the airport terminal and could be seen sleeping on makeshift beds.

“There is no service, no facilities. So we spent a night in conditions, in animal conditions, I think,” Italia Bongarzone, a passenger from Italy, said.

A Cathay Pacific flight that had been diverted to Toronto spent 10 hours on the tarmac, and a second Cathay Pacific jet with 250 people was still on the runway after eight hours as of Tuesday afternoon.

Maria Chang, a Cathay Pacific passenger flying from Hong Kong, said it had taken her 40 hours to reach New York. She estimated that it would have taken her about that long to “go around the world”.

New York’s airports struggled to get flights in and out and some jetliners couldn’t even get to the gate.

Airlines were dispatching jets to the airport without lining up gate space first, causing back-ups on the ground, according to Steve Coleman, a spokesman for the Port Authority of New York and New Jersey, which operates Kennedy.

Cathay Pacific spokesman Gus Whitcomb said the jets had taken off under the assumption that they would have somewhere to go upon landing.

The chaos was also reflected in New York’s streets, where hundreds of abandoned city buses and dozens of ambulances still sat in the middle of snow drifts from the storm.

Officials predicted streets would not be clear until Wednesday – a day later than they first promised – and have appealed to private companies to help out, but residents are frustrated as they attempt to dig out their vehicles out of the snow.

On one street in the Howard Beach area of Queens, residents were becoming frustrated as they attempted to dig their vehicles out of the snow.

In New Jersey, police in helicopters counted at least 60 vehicles stranded along a highway at the shore. 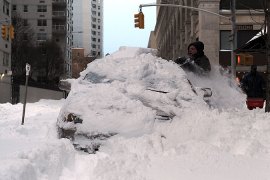 Travellers trying to get home after the holiday weekend are stuck in airports and trains, stranded by a blizzard. 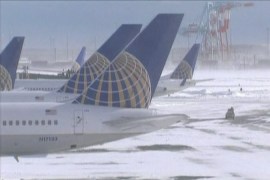 US suffers from snow storm 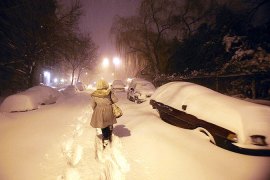 US storm not yet over

Record-breaking snow storm that has hit eastern coast of US will take a few more hours to ease off.