Iraq’s leaders are investigating the possibility of removing some of Baghdad’s hundreds of unpopular checkpoints because of the improving security situation.

Nouri al-Maliki, the Iraqi prime minister, asked commanders on Tuesday to evaluate the security situation in Baghdad and decide which of the roughly 870 checkpoints that dot the city can be removed.

The checkpoints are manned by Iraqi soldiers and police and designed to catch anti-government fighters, but they also slow down traffic in the already congested city.

The development comes amid remarks by al-Maliki that US troops, which provide security back-up for Iraqi government forces, must leave the country by the end of 2011.

He told the Wall Street Journal newspaper there will be no extension to the planned US withdrawal. It was his first Western media interview since he began a second term as prime minister, nine months after inconclusive elections.

With security improving last year, al-Maliki started to remove some of the concrete blast walls that snake their way across the city, dividing neighbourhoods and protecting buildings.

But the decision was fraught with risk. The removal of some of the walls was followed by a series of deadly blasts targeting government institutions, killing hundreds of people. Soon some of the concrete barriers went back up.

Baghdad residents generally abhor the checkpoints which can make life unbearable for people going to work or school. Each Baghdad resident has a story about being stuck at a checkpoint for an hour or more.

“Checkpoints are a useless measure because they just ask people ‘Are you carrying weapons?’ and they say no and they check the trunk and that’s all,” Lwaa Adnan, a 19-year-old taxi driver who carries students to Baghdad University every day, said.

When asked how many checkpoints he passes through on a daily basis, Adnan counted at least six he must negotiate to get from his neighbourhood in northern Baghdad to the university in the southern part of the city.

Another driver described in frustration of how high-ranking government officials in their security convoys with lights flashing bypass the long line of vehicles at the checkpoints while regular citizens are forced to stew, sometimes for hours.

Even more frustrating is that most Baghdad residents do not even consider the checkpoints to be remotely effective.

Security forces at the checkpoints use a wand-like, handheld mechanism made in the UK that is supposed to be able to detect explosives in passing vehicles but has been widely discredited.

British authorities banned its export to Iraq and Afghanistan after a report raised serious questions about it.

The captain in charge of one checkpoint in the Karradah neighbourhood said less than a week ago his men found a bomb attached to the undercarriage of a minibus and defused it.

But Captain Odai Hamid Allah Ali said he understands drivers get frustrated at having to wait in line and that removing the concrete blast walls and checkpoints could help bring back some of Baghdad’s once fabled beauty.

Al-Moussawi said a committee responsible for evaluating the security situation would make a recommendation to al-Maliki in a week on whether some checkpoints can be removed and if so how many.

Al-Maliki will make the final decision. 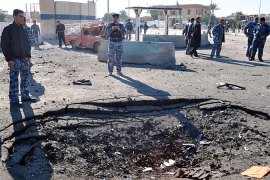 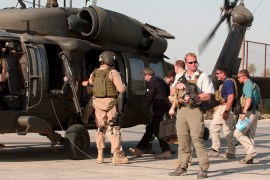 Blackwater killings: ‘US at fault’ 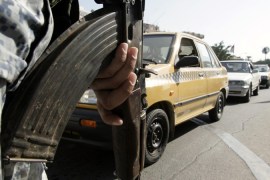 At least 17 people killed as bombing attacks across the capital target religious tourists.