As tensions over unemployment and poor living conditions flare, security forces have blocked an anti-government rally in the Tunisian town of Gafsa, sources have told Al Jazeera.

The protest, organised on Tuesday by the Tunisian federation of labour unions, was one of a number of reported public demonstrations across the country. The public defiance marks a rare display of a popular anger against the North African government.

Around 300 lawyers were also reported to have rallied in a street close to the government’s palace in the Tunisian capital of Tunis.

Lina Ben Mhenni, a Tunisian blogger and university assistant, told Al Jazeera that she heard that two of the lawyers were arrested late on Tuesday.

“People were protesting in solidarity with Sidi Bouzid, but they were also talking about the policies of the government and the president,” she said.

“They are even asking the president to leave,” she said.

A separate protest in the capital, organised by a high school trade union, was held outside the ministry of education, according to Ben Mhenni.

“They were censored because they wrote about the protests of Sidi Bouzid this week,” Ben Mhenni said.

Protests are rare occurrence in Tunisia – which has been run for 23 years by President Zine al-Abidine Ben Ali and works closely with Western governments to combat al-Qaeda.

The latest protest followed the deadly shooting by police of a jobless graduate in Bouziane, south of Tunis, last Friday.

Clashes broke out earlier this month in the town of Sidi Bouzid after a man committed suicide in an apparent protest against high unemployment.

Lina Ben Mhenni also said that there were reports of another young man who on Tuesday committed suicide in the town of Nabeuls by throwing himself on a train track.

“Young men are killing themselves in Tunisia,” she said.

Mohamed Ben Madani, an analyst with the Maghreb Review, told Al Jazeera that this is one of the most extraordinary events that happened in Tunisia for the last 23 years.

He said that for the first time, through the use of social media, the world was seeing videos and pictures of the protests, and how the government cant contain it.

“What is shocking is that if this happened in Iran or in Moscow, then it would be on all global media, but because this is Tunisia, nobody cares.”

Madani said that while this may not lead to the “overthrow of the Ben Ali government, which is very well protected, but they will get the message that enough is enough.”

On the social media site Twitter, there were unconfirmed reports of the president being seen in Dubai on Friday.

“This morning all the people were talking about Ben Ali being in Dubai, but nobody has the right information,” Lina Ben Mhenni said.

“I just heard that the president is going to talk on TV tonight – I’m not sure but this what I heard.”

Meanwhile, the Tunisian parliament, along with  four political parties, accused  Al Jazeera of attempts “to destabilise the country, and to spread sedition via its coverage to Sidi Bouzaid incidents and the subsequent  protests”.

They have jointly issued statements released by the official Tunisian news agency, saying that Al Jazeera had “opted to exaggeration, fabrication and  fallacy in its coverage  of social protests  over unemployment.” 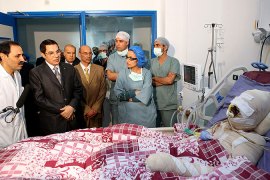