The leader of Somalia’s main armed group al-Shabab has threatened to attack the United States if Barack Obama, the US president, does not embrace Islam.

The group has not launched an attack outside Africa but western intelligence agencies have long been concerned about the group targetting young Somali-Americans for recruitment.

“We tell the American President Barack Obama to embrace Islam before we come to his country,” Fuad Mohamed “Shongole” Qalaf, one of the rebel leaders, said in a radio broadcast on Monday.

The message was recorded in the town of Afgoye, near the Somali capital of Mogadishu during a meeting of Qalaf and Sheik Hassan Dahir Aweys, the former leader of the Islamic Party, another armed group.

On Sunday Aweys, who founded the more political Islamic Party in 2007, said his group will fight under al-Shabab’s command to help oust “infidel” invaders from Somalia.

“We have united for the sake of our ideology and we are going to redouble our efforts to remove the government and the African Union from the country.

“We have been waiting [for] this unity for so long and thanks to Allah for finally helping us succeed to be a unified mujahideen force,” added Aweys.

Al-Shabab holds most of southern and central Somalia and has the support of hundreds of foreign fighters, mostly radicalised East Africans.

The group seeks to overthrow the weak UN-backed Somalia government, which is protected by 8,000 Ugandan and Burundian African Union peacekeepers.

The al-Shabab launched co-ordinated suicide attacks in Uganda in July that killed 76 people. It has also announced its allegiance to al-Qaeda and is believed to be harbouring a mastermind of the twin 1998 bombings of US embassies in Kenya and Tanzania that killed 224 people. 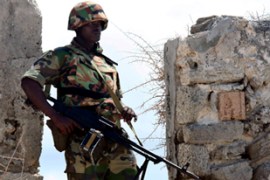 Group says Mogadishu will be turned into ‘graveyard’ for peacekeeping reinforcements. 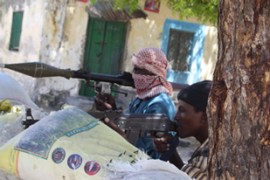 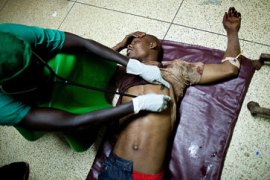 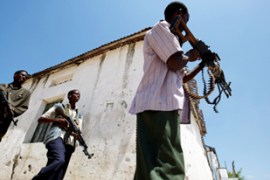 US president signs order to freeze assets of individuals linked to al-Shabab movement.