A spokesman for Cote D’Ivoire’s president has warned that civil war could break out in the country if a regional bloc carries out threats to force the disputed leader from power.

Ahoua Don Mello also called threats of military action from ECOWAS, the West African bloc of countries, “a Western plot directed by France” against Laurent Gbagbo, should he not step down following a November election loss.

His warning came soon after Yao Gnamien, Gbagbo’s special advisor, dismissed the threats to depose the president as an internationally forbidden use of force.

Gnamien’s comments on Sunday followed reports that the Economic Community of West African States (ECOWAS) would convene a meeting of its members’ defence chiefs of staff to plan for action using “legitimate force”.

The 15-member bloc made the statement following a summit held in Abuja, Nigeria’s capital.

Cote d’Ivoire is locked in an election standoff in which 200 people have been killed. Gbagbo claimed victory in the presidential election on November 28 which the UN and many foreign governments say was won by rival Alassane Ouattara.

“I think that the use of force is forbidden in the international relation of any country,” Gnamien told Al Jazeera from Abdijan.

“The AU or the UN have to identify clearly what the purpose of the crisis and they have to sit down and solve the problem. Why do we have to use force?”

Gnamien said several West African countries had faced similar political problems “but we have never used force to solve this kind of problem”.

ECOWAS also said it would also send a special envoy to Cote d’Ivoire.

But Gnamien said any mission sent to Cote d’Ivoire to solve the impasse has to “identify the problem before proposing the solution”.

Meanwhile, an airplane belonging to Gbagbo has been reportedly confiscated at an airport in the Swiss city of Basel on Sunday, the French foreign ministry said, as part of measures to put pressure on him to step down.

“Ivory Coast’s legitimate authorities (Ouattara’s party) have asked us to ground the aircraft and it is precisely what we have done,” Bernard Valero, France’s foreign ministry spokesman, told the Reuters news agency.

The Central Bank of West African States (BCEAO) has cut off access to state funds for the Gbagbo government in a bid to force him to quit.

BCEAO made the decision in an emergency session, later saying that only representatives of Ouattara would have signing privileges on state accounts.

The UN General Assembly formally recognised Ouattara on Thursday as the winner of the presidential election. But even without the backing of the international community, Gbagbo controls the country’s military and dominates the state media.

Meanwhile, about 14,000 people have already fled Cote d’Ivoire for neighbouring Liberia, the UN says, as fears continue to mount that an election dispute in the West African state could rekindle a civil war.

“UNHCR has registered a total of 14,000 Ivorian refugees in eastern Liberia who fled in the wake of post-electoral instability,” the UN’s refugee agency said on its website.

“With their numbers growing, the humanitarian needs are increasing for the mostly women and children refugees as well as for the villagers hosting them.”

UNHCR that it was preparing for more than 30,000 refugees.

Ouattara has called on Gbagbo to “accept the will of the people” and leave power.

He has also ordered defence and security forces, who are still loyal to Gbagbo, to “do their republican duty and protect the population against militias and foreign mercenaries”.

Ouattara said on Friday that he had asked the International Criminal Court to investigate post-election violence in the country.

“Indeed, violence has resurfaced in our cities and our neighbourhoods. During the curfew, people were abducted and executed by elements of the Republican Guard … backed by mercenaries and foreign militia,” Ouattara said in a statement.

“In view of the seriousness of the facts, I asked the International Criminal Court to send a mission to our country in the coming days.”

But the UN says masked gunmen blocked it from investigating the site of a possible mass grave, and it is feared the site may be filled with the bodies of people killed in fighting over the disputed election.

Gnamien, the presidential adviser, told Al Jazeera that the government would not prevent UN investigators from doing their job. 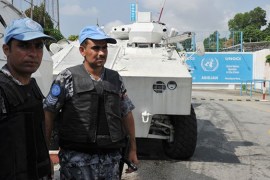 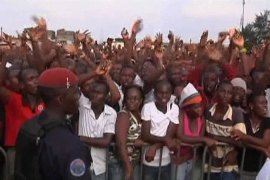 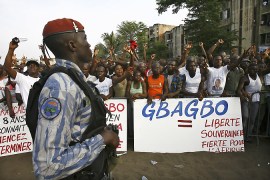