Iran’s two main opposition leaders have been barred from leaving the country, a prominent Iranian politician has said.

Mousa Qorbani, a member of the judicial committee, announced the travel ban on Saturday for Mir Hossain Mousavi and Mahdi Karroubi – reformist leaders who ran in the disputed 2009 presidential elections.

The measures are part of a state-sponsored crackdown on the reform movement after the elections sparked nationwide protests against the ruling party over vote fraud allegations.

The government accuses opposition leaders of being “stooges of the west” and of seeking to topple the ruling system through street protests.

Qorbani also suggested to put the leaders on trial after many mid- and low-level figures in opposition groups have been tried and sentenced to long prison terms.

He said authorities had “recognised” that Mousavi, Karroubi are “mohareb” – a term meaning that they are “fighting God”. “Therefore, they are barred from leaving,” he was quoted by state media as saying.

Many other opposition figures who have been convicted were tried on charges of being “mohareb”.

The elite Revolutionary Guard, Iran’s most powerful military force, has pushed for the trial of the two opposition leaders, as well as Mohammad Khatami, the former reformist president who also ran in the 2009 elections.

Jailing either of the three leaders could stoke tensions with the opposition.

Mousavi and Karroubi said in a statement on Wednesday that they are already living in a “big prison” and did not care if they were put behind bars in a”small prison” for defending the trampled rights of the Iranian nation.

Although no travel ban had been officially announced, Khatami was forbidden to travel to Japan in April to attend a conference on dialogue between cultures and has also been labelled a “mohareb”.

The opposition claims that Mousavi was the rightful winner of the 2009 election and that president Mahmoud Ahmadinejad was declared the winner through massive vote rigging.

Hundreds of thousands of opposition supporters took to the streets in the aftermath of the election in support of Mousavi but their peaceful protest was crushed by government forces.

The opposition says more than 80 demonstrators were killed in the turmoil, while the government puts the death toll at 30. 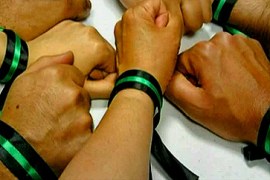 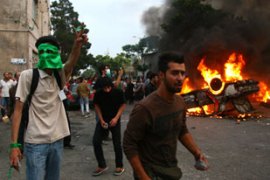 Human rights group says about 200 people have been detained in government crackdown. 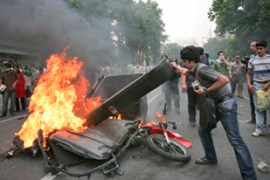