One of Lebanon’s most wanted men has been found dead in a refugee camp in the country’s south.

Lebanese and Palestinian security officials said on Saturday that Ghandi Sahmarani, also known as Abu Ramez, was found handcuffed and blindfolded, with a gunshot wound to his head, in the Ein el-Hilweh refugee camp near the southern port city of Sidon.

Ein el-Hilweh is the largest of Lebanon’s 12 Palestinian refugee camps.

Sahmarani was a senior figure in Jund al-Sham, a group said to be inspired by al-Qaeda.

His death could be a major blow for the group, which has had several leaders and members either killed or fleeing its ranks in the past few years.

The group has clashed in the past with members of the Fatah group and with Lebanese troops.

Sahmarani had been living in or near the camp for years. He fled his native northern Lebanon following clashes in the region of Dinniyah in 1999 between fighters and Lebanese troops that killed 11 Lebanese soldiers, at least five civilians and 17 fighters.

In 2008, several Jund al-Sham fighters were killed including Shehadeh Jawhar, the group’s
military commander, who fought US troops in Iraq and was wanted by Lebanese authorities for numerous acts of violence. 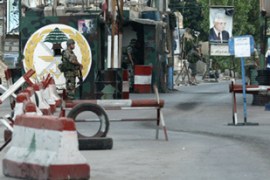