At least 42 people have been killed and some 70 others injured after a suspected suicide bomber attacked a crowd of people receiving food aid in northwest Pakistan.

Al Jazeera’s Kamal Hyder, reporting from Islamabad, said that the incident took place on Saturday morning at a World Food Programme (WFP) distribution centre in the town of Khair, in Bajaur agency.

“A lone suicide bomber penetrated into the crowd and then detonated his device and according to reports from the area there are high casualties.”

Fazal-e-Rabbi, a local police official, said that the bomber, dressed in a traditional women’s burqa, first lobbed two hand grenades into the crowd.

Rabbi said that the attacker, believed to be a woman, then detonated an explosive vest.

No group has yet claimed responsibility for this attack.

Our correspondent said that Bajaur is not equipped to deal with such incidents even in the best of times and hospitals are struggling to cope.

“It is a public holiday, both being Christmas and also the birthday of the founder of Pakistan, so doctors were called back to the hospital on loud speakers.”

Amjad Jamal, spokesman for the WFP in Pakistan, told Al Jazeera that none of the UN agency’s staff were injured in this attack.

“The suicide attack was not within the distribution site; it was at a security checkpoint some 250 to 300 metres away from our site,” Jamal said.

“People were coming to get their food rations from the WFP site. Once they get themselves screened, then they come to the site, so there was a big number of people waiting in that area.

“For the time being this particular point will be closed because the security authorities have cordoned off the area, but all other WFP operations within the country remain open and our relief operations will continue.”

“We went there to get food items which were being distributed, suddenly a woman came and the blast occured,” Noor Ullah, one of the wounded, told Al Jazeera. “When I regained consciousness, I was covered in blood and was in a canal. After that, soldiers took us to the hospital.”

Officials and witnesses said the death toll could be much higher.

The attack in the Bajaur region on the Afghan border came a day after a big clash between Pakistani Taliban fighters and security forces in the neighbouring Mohmand region left 11 soldiers and 24 fighters dead.

A Taliban spokesman confirmed the clashes but disputed the official death toll, saying only two of their fighters were killed.

Earlier this month dozens of people were killed in a string of similar attacks.

Pakistan’s volatile ethnic Pashtun tribal lands on the Afghan border have seen regular confrontations between fighters and the army.

Hundreds of fighters have been killed and many of their strongholds have been captured, but they have retaliated and killed hundreds of people in a campaign of bomb attacks across the country.

A senior military official said in October that it would take at least six months to clear fighters from Bajaur and Mohmand areas.

Around 4,000 people have died in suicide and bomb attacks across Pakistan since government forces raided the Red mosque in Islamabad in 2007.

The attacks have been blamed on networks linked to the Taliban and al-Qaeda. 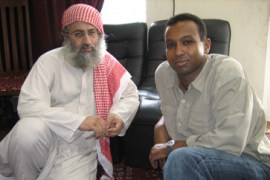 Inside the Red Mosque

Rageh Omaar’s special on the Red Mosque in running for prestigious award.