Fresh attacks against Christians in the Philippines and Nigeria have marred Christmas festivities as church leaders condemned religious persecution and called for global peace and reconciliation.

As Christian leaders highlighted the plight of believers facing the threat of attacks around the world, a bomb in a church during Christmas mass in the southern Philippines on Saturday wounded 11 people, including a priest.

Military officials would not immediately name any suspects in the blast on Jolo island, but the island is a known bastion of the Abu Sayyaf, an al-Qaeda-linked group, blamed for deadly attacks in the Philippines and for kidnapping priests and nuns.

“There is a possibility that this could be the handiwork of the Abu Sayyaf because they have been perpetrating similar attacks against the Catholic church,” Lieutenant Randolph Cabangbang, a military spokesman, said.

“We’ve placed our troops on alert to prevent similar attacks on churches, shopping malls, parks and transport terminals,” he added.

A series of blasts in Nigeria’s central region killed at least 32 people and left 74 in critical condition on Christmas Eve, police say.

The explosions struck during celebrations in villages near the city of Jos on Friday night, the state police commissioner said.

“It [explosions] was caused by a series of bomb blasts. That is terrorism, it’s a very unfortunate incident,” Azubuike Ihejirika said.

In separate attacks on Friday night, at least six others were killed and another eight wounded when gunmen attacked two churches in the northeast city of Maiduguri.

Meanwhile at the other end of the city, Haskanda Jessu, a reverend of the Church of Christ in Nigeria, said that three men attacked his church, killing a security guard.

Gregory Yenlong, the information commissioner of Plateau State, of which Jos is the capital, said there had been rumours of attacks aimed at disrupting Christmas celebrations in recent days.

However, there was no immediate indication that the two incidents were linked and police in Jos cautioned that the cause of the explosions had not yet been established.

The attack “is unfortunate, especially at this time when we want to ensure sustainable peace in the state,” Yenlong said.

Jos is the epicentre of religious violence in Nigeria’s “middle belt”, where dozens of ethnic groups vie for political and economic control. The violence often falls along religious lines and has claimed more than 500 lives this year.

The latest violence came as an audio-taped threat directed to “the unbeliever and Christian countries celebrating Christmas” would be targeted for attacks, the SITE monitoring group said on Friday.

The recording bore the voice of a member of the Shumukh al-Islam forum, said the US-based monitor.

In Rome, Pope Benedict XVI prayed for God to punish the world’s “oppressors” and bring about “true brotherhood” between peoples in his traditional Christmas message in Saint Peter’s Basilica.

“Lord make your promise come finally true. Break the rods of the oppressors. Burn the tramping boots. Let the time of the garments rolled in blood come to an end,” Benedict said at the Christmas Eve mass in the Basilica.

In Britain, the leader of the world’s Anglicans urged people to remember those across the globe who face persecution because of their Christian faith. Rowan Williams’ message was for his Christmas Day sermon, excerpts of which were released early on Saturday.

“We may feel powerless to help; yet we should also know that people in such circumstances are strengthened simply by knowing they have not been forgotten,” said the Archbishop of Canterbury.

The sense of Christmas cheer was being sorely tested in parts of Europe where freezing temperatures have caused transport chaos, with thousands of travellers forced to spend the night in trains, on ferries or in airports as the snow piled up. 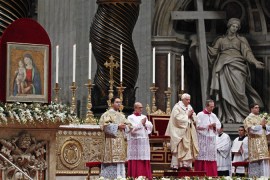 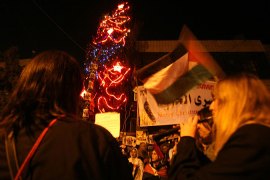 Flocking to Bethlehem for Christmas

Thousands of pilgrims, clergy and tourists converge on the Holy Land to celebrate the birth of Jesus Christ. 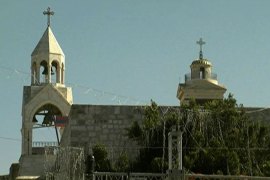 A considerable increase in the number of visitors to Bethlehem boosts local economy and Palestine’s national income.