North Korea has stepped back from confrontation over “reckless” military drills by the South and reportedly issued a new offer on nuclear inspections, drawing a cautious response from Seoul and Washington.

Air-raid bunkers on the South Korean island of Yeonpyeong shook during South Korea’s live-fire artillery exercise, which went on for more than 90 minutes on Monday.

On November 23, North Korean artillery shelled Yeonpyeong, located close to the disputed maritime border off the west coast of the Korean peninsula, and killed four people, in the worst attack on South Korean territory since the Korean war ended in 1953.

But the North Korean guns stayed silent on Monday.

“The revolutionary armed forces of the DPRK did not feel any need to retaliate against every despicable military provocation,” the official KCNA news agency said, quoting a communiqué from the North’s Korean People’s Army Supreme Command that called the drills a “childish play with fire.”

Reacting to the development, Bill Richardson, a US politician-diplomat, said in Beijing on Tuesday North Korean officials had displayed a “pragmatic attitude” and appeared to have recognised they had moved “too far down the precipice”.

He also said North Korea would allow inspectors from the International Atomic Energy Agency into the country to demonstrate that it is not processing highly enriched uranium.

“Now there has to be deeds and not words,” Richardson said. “But it’s up to governments to move forward with the agreements that we’ve made, and it’s time for citizen-diplomats like myself to step aside and let governments move forward.”

He said the offer might pave the way for the resumption of six-party talks which also involve the US, Russia, Japan, China and South Korea – although Washington, Seoul and Tokyo have been cool to this idea, reluctant to reward perceived bad behaviour.

“Maybe now is the time for the six-party countries to reach out to North Korea and say, ‘OK, let’s get down to business’,” Richardson said.

North Korea’s restrained response brought a measure of relief amid a crisis that has raised fears of war along one of the world’s most heavily fortified frontiers.

Earlier, Al Jazeera’s  Steve Chao, reporting from Incheon, a city on the country’s western coast, said that the South Korean government denied that Monday’s exercise was a provocation, insisting that it was a routine drill.

Our correspondent also reported that the North Koreans view the military drills as “proactive”, saying: “There is even talk that North Korean jets have been taken out of their hangers – possibly along the west coast in a possible attempt to launch an attack in the event that these drills go forward.”

The US said North Korea’s decision not to retaliate simply showed it was behaving “the way countries are supposed to act.”

The North had threatened it would strike back if its neighbour went ahead with the live-fire exercise.

Monday’s artillery exercise came hours after a UN Security Council meeting on the crisis ended in an impasse, with Russia and China resisting an explicit condemnation of North Korea for last month’s attack.

Another Security Council meeting planned for Monday was scrapped as diplomats assessed their positions.

“Unfortunately, that’s going to draw in both the United States, and potentially China, into a larger conflict that nobody wants … I think that the leaders of the United States and South Korea are now playing a very dangerous game that could really escalate into a full-blown war.” 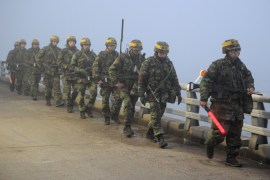 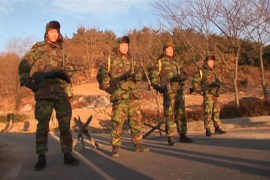 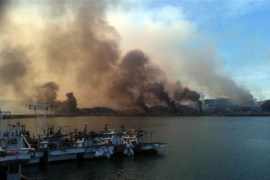