Airports across Europe have continued to ground flights amid snow and freezing weather, which has also wreaked havoc upon rail and road links.

Alan Fisher, Al Jazeera’s correspondent at the airport, said on Tuesday that 72 hours after the first major snowfall, services were still restricted.

“We’re told that only around a third of the flights from Heathrow will takeoff and land today, that means thousands of disappointed passengers,” he said.

“They’re saying that this could continue until after Christmas so that means Sunday, possibly even Monday, and so those who had planned to go away will now have to rethink.”

Our correspondent also said a lack of snow clearing machines and personnel were the main causes of the problems.

“You can see that BAA, the Spanish owners of Heathrow, simply haven’t put in place enough plans to cope with the winter weather. They’ve been caught out, and caught out badly,” he said.

British Airways said it expected to make a “significant number of cancellations” to its shorthaul services on Tuesday from the London airport.

Eurostar train services between London and Paris also continue to be affected with passengers waiting up to five hours to board a train in the British capital.

The rail line has advised passengers to cancel their trips in the coming days unless absolutely necessary.

Germany is also experiencing problems, with fresh snow in Frankfurt forcing the airport there to suspend take-offs and landing for a few hours on Tuesday morning.

However, the Belgian capital’s situation improved overnight as Brussels airport managed to secure enough de-icing liquid to treat most aircraft departing on Tuesday.

Boris Johnson, the London mayor, called on Monday for a “Herculean effort” by BAA, which operates Heathrow, and its contractors to get planes back in the air, but more snow was expected in the area.

Philip Hammond, Britain’s transport secretary, has promised an inquiry into the way passengers were treated at Heathrow after their flights were cancelled.

The French government has also criticised delays there, with Thierry Mariani, the country’s transport minister, saying it was “unacceptable” that some 3,000 people were blocked at Charles de Gaulle Airport over the weekend.

Icy roads have also wreaked havoc across the region, including in Britain where some roads have been made impassable after drivers abandoned their vehicles in heavy snow.

Authorities in parts of western Germany have banned lorries weighing more than 7.5 tonnes from highways as a safety measure, while British motoring organisations warned of potentially fatal conditions on the roads.

Forecasters have said Britain is experiencing some of the most severe winter weather in a century.

Retailers have said the poor weather would affect their sales on what is traditionally the busiest shopping weekend before Christmas.

Earlier this month, Insurer RSA said the snow could cost the British economy up to $2bn a day.

In the western US state of California, storms have delivered snow and a record amount of rain, with fears of mudslides emerging.

Jamie Meier, a meteorologist of the National Weather Service, said that some regions in the south of the state felt more than 12 inches of rain – a high for rainfall in one storm incident since 2005. 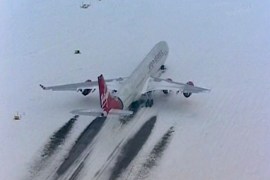 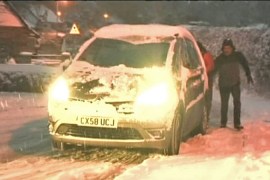 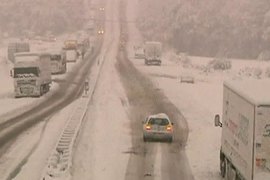 At least 18 people die as freezing conditions cause chaos across continent.