One person was killed and 26 people were injured  when a bag that was about to be loaded onto a Kampala-bound bus in the Kenyan capital exploded, police said.

“What I can confirm so far is that one person is dead, and 26 are injured and have been taken to various hospitals,” Eric Kiraithe, the police spokesman, told the Reuters news agency on Monday.

“We suspect that the dead person could be one of the six people who had wanted to load the bag into the bus, but this is yet to be confirmed.”

Earlier on Monday, Ugandan security agencies said they were on high alert for a possible attack after their intelligence reports indicated al-Qaeda-linked groups could be planning to hit Uganda during the festive season.

A total of 79 people were killed in that attack, for which a Somali rebel group al-Shabaab claimed responsibility.

Reuters TV footage on Monday showed the bright red Kampala Coach bus at its stop where it was taking in passengers, with blood stains on the road and bags strewn around the scene. 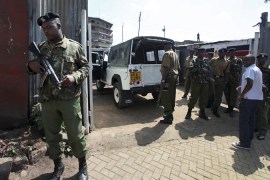 Police say 346 foreigners have been detained over attacks which killed three officers in Nairobi last week.