Omar al-Bashir has been the Sudanese president since he led a bloodless coup in 1989.

In April, he was re-elected in the country’s first multi-party presidential poll in 24 years.

The 65-year-old leader and several senior ministers in his cabinet have been criticised for what the United Nations has called “ethnic cleansing” in the western province of Darfur, home to a number of non-Arab tribes who rebelled against the government in 2003.

The tribes of Darfur accused Bashir’s administration of siding with Arab tribes in the centuries-old fight over scarce resources among the province’s communities.

The United Nations estimates that between 200,000 and 400,000 people have died in the conflict, with a further 2.7 million displaced. But Bashir’s government claimed that the United Nations, influenced by Western powers, had exaggerated the numbers.

In June 2008, the International Criminal Court (ICC) charged Bashir with war crimes and crimes against humanity in connection with the ongoing attacks against Darfur’s non-Arab ethnic groups.

On March 4, the ICC issued an international arrest warrant for Bashir, who became the first sitting head of state to be indicted by the court.

But Sudan is not a signatory to the ICC charter, and Bashir has rejected the court’s legitimacy and refused to abide by the warrant for his arrest.

Bashir was born into a peasant family in 1944 in northern Sudan, which until independence in 1955 was part of the Kingdom of Egypt and Sudan. He enrolled in a military academy in Egypt in 1960 and graduated from another military academy in Khartoum in 1966.

He rose through the ranks quickly. He was part of the Sudanese units sent to back Egypt in the 1973 Arab-Israeli war.

As a colonel in the Sudanese military, Bashir was well-positioned to lead a bloodless military coup against Sadiq al-Mahdi, the prime minister, on June 30, 1989.

Bashir was subsequently appointed chairman of the Revolutionary Command Centre for National Salvation (RCC), which was established as a “transitional” government.

After allying with Hassan al-Turabi, the speaker of the Sudanese parliament and head of the National Islamic Front, Bashir began instituting sharia (Islamic law) and abolished political parties in 1990.

Three years later, Sudan held presidential and parliamentary elections, and Bashir, running completely unopposed for president, won with 75 per cent of the vote. He would eventually legalise the registration of political parties in 1999.

Later that year, Bashir ousted Turabi, who had grown increasingly close to Islamist groups unpopular in the West, from his post as parliament speaker and had him imprisoned.

In 2000, Bashir was re-elected after winning 90 per cent of a popular vote in an election described as a sham by the opposition.

In 2003, several ethnic groups in Darfur launched a rebellion against the Sudanese government and allegedly state-backed Arab militias known as the janjaweed.

The United Nations and human rights groups say Khartoum has used the janjaweed as a proxy force to crush the revolt. Khartoum denies the claims.

In 2004, the United States – which also is not a signatory to the International Criminal Court – referred to the Darfur conflict as genocide.

The UN Security Council referred the Darfur case to the ICC in 2005, giving them the mandate to investigate the claims.

In July 2008, Luis Moreno-Ocampo, the ICC prosecutor, asked for an arrest warrant to be issued for Bashir, accusing him of genocide, crimes against humanity and war crimes in Darfur. The warrant was issued on March 4, 2009.

Sudan says the ICC has little power to enforce the arrest warrant but believes Bashir can be arrested in any country that is a signatory to the Rome Statute, the treaty which established the court in 1998.

He has since visited several other countries, including Ethiopia, Libya, Qatar and Egypt.

Addressing a Sudanese crowd in Doha, Qatar, after participating in the Arab summit in late March 2009, he said: “[George] Bush is the criminal, he is the one who should be arrested, not the others … Western media has dedicated itself to promote lies to control the public opinion”.

He shouted at crowd: “Is mass raping a Sudanese characteristic?” The crowd answered no.

Bashir was sworn in for another presidential term in May after winning elections that were boycotted by major opposition parties and marred by fraud allegations. 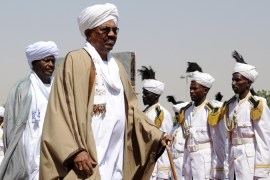 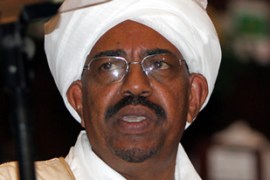 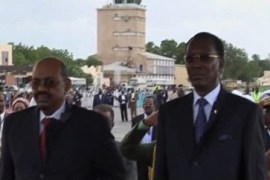 Sudan president arrives in Chad despite being wanted on genocide and war crimes charges.