A new set of guidelines sets out that Japan needs to focus on the rise of China and not the Cold War threat of Russia in defining its security goals.

The guidelines, announced on Friday, were approved by the cabinet. They call for a stronger alliance with the US – Japan’s biggest ally – and expanded security networks with regional partners, including South Korea and Australia.

But China immediately slammed the guidelines as “irresponsible”. Jiang Yu, China’s foreign ministry spokeswoman, said China is a force for peace and development in Asia and threatens no one.

To bolster its forces, Japan will acquire new submarines and fighter jets, upgrade its missile defence capabilities and make its ground forces more mobile so that they can quickly respond to emergencies in southwest Japan.

The plan did not specify the location but Japanese media have said 100 ground troops will be sent to Yonaguni, in Okinawa prefecture, where Japan currently has no troops. Placing them on the island that is closer to China, Taiwan and the disputed islands could be contentious.

The guidelines paint China as a bigger threat than Russia and say Japan is shifting its defence emphasis from the northern island of Hokkaido to islands in the south, such as Okinawa and territories claimed by both Tokyo and Beijing that have recently led to diplomatic tensions.

In September, Japan released a Chinese fishing boat captain who had been detained for two weeks after his trawler collided with two Japanese coast guard vessels near  the string of contested islands in the East China sea.

Washington has urged Japan to play a greater security role in the region, and proposed a three-way military alliance that would include South Korea.

The two countries displayed a show of strength and solidarity when they launched eight day’s worth of joint military drills off Japan’s southern islands starting December 4, just days after North Korea shelled a South Korean village.

Indeed, the Japan-US alliance remains “indispensable” to Japan’s security, the guideline said, calling for stronger cooperation between Japanese and the 47,000 US armed forces based in this country, even though many have protested against the presence of US military bases in Japan for years.

But the guidelines also cited “changes in global power balance” and noted a relative decline of America’s strength and rise of emerging countries such as China and India.

Japan, meanwhile, should pursue its own efforts to enhance missile defence capabilities to protect itself from threats by China and North Korea, it said.

The guidelines said China’s rapid military buildup and lack of transparency are matters of concern and that North Korea’s military activity is a “pressing and serious destabilising factor” for Japan.

“The Korean Peninsula and North Korea are imminent and concrete threats to Japan, while China is more of a medium-term threat … It is a major risk factor for Japan’s security in the southwestern islands and the Japan-US security alliance in the long run,” said Hideshi Takesada, executive director at the National Institute for Defense Studies. 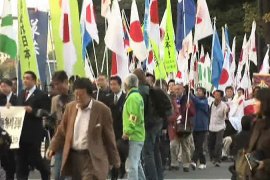 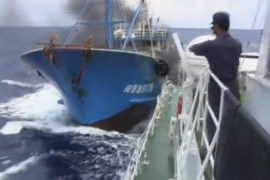 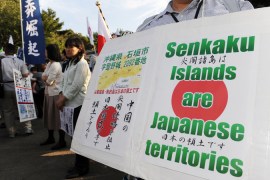 Thousands take part in tit-for-tat demonstrations over islands in the East China Sea claimed by both countries.