Nearly 200 individuals backing “violent Islamist extremism” are residing in Sweden, a report by the country’s security service has said, days after a man killed himself in bombings police described as a “terrorist crime”.

While those individuals form “a serious threat to people in Sweden,” the threat is still limited in scale, Maria Rembe, chief analyst at the Swedish Security Service’s counterterrorism unit, said.

“In the report, we’ve said that the concrete threat is mainly directed at people in other countries,” she said as she presented the report on Wednesday.

“After Saturday’s attempted attack, we can see that there is also a serious threat to people in Sweden. It is, however, important to underline that we still judge that there is no threat to the fundamental structures of the society or the leadership of the nation.

“There is no support for claims that the number of people radicalised is increasing.”

Rembe said Taimour Abdulwahab, the 28-year-old who was killed on Saturday in what has been dubbed “Sweden’s first suicide bombing”, was not among those 200 known to the security service.

The report, commissioned by the government in February, said the nearly 200 people known to the security service (SAPO) had either participated in or supported “violent Islamist extremism” in 2009 or later, and had been registered as residents of Sweden at the time.

It said the main focus of those tracked was to support armed groups abroad, mainly al-Shabab in Somalia and al-Qaeda related groups in North Africa, Iraq, Afghanistan and Pakistan.

While the presence of foreign troops in Muslim countries such as Afghanistan and Iraq was said to be a main reason for people to embrace violence in the name of Islam, the report said the deployment of 500 Swedish soldiers in Afghanistan was not a major contributing factor.

However, ten minutes before the first bomb was set off in Stockholm on Saturday, a message which appeared to come from the culprit was sent to SAPO and the Swedish news agency TT, saying it was time for Muslims to avenge Sweden’s presence in Afghanistan and caricatures of the Prophet Mohammad drawn by a Swedish cartoonist.

“Our acts will speak for themselves,” TT quoted the message as saying. “Now your children, your daughters and your sisters will die as our brothers, our sisters and our children are dying.”

Coinciding with the report, Swedish parliamentarians voted on Wednesday to extend the mandate of their troops in Afghanistan until the end of 2011.

The report concluded that on average, those individuals covered by the report had been Swedish citizens for twelve years.

They originate in 25 different countries, the report said, with Sweden being the third most common nation of birth.

Further detailing the motivation for those embracing violence, Rembe said that far more than Muslim ideology, gang dynamics, a search for thrills and fascination of violence were driving forces.

She added that a deeper knowledge of Islam, sometimes obtained by studies abroad, actually tended to make some of those radicalised abandon violence.

“They are loosely joined groups of friends, most often lacking connections to established violence-prone Islamist extremist networks” Rembe said about the 200 individuals covered by the report.

“They are mostly inspired by global ideologies which they find on the internet. They watch propaganda, sermons and violence-embracing messages on the internet They listen to for example [Yemeni-American preacher Anwar] al-Awlaki and read the [al-Qaeda-affiliated] magazine Inspire.”

The report noted that though most had been radicalised at a young age, many continued to be active even as the grew older and formed families, contrary to patterns in other violence-prone groups.

A small number of women were among those said to support the use of violence, but they were not seen as likely to actually commit violent acts. 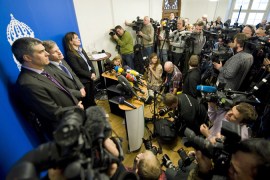 Police say there could be co-plotters behind Stockholm blasts as investigators probe UK link. 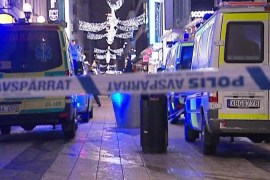