A Sunni Muslim group, Jundallah has claimed responsibility for a suicide attack that killed at least 41 people and wounded more than 90 others near a mosque in the southeastern Iranian city of Chabahar.

The group, also known as Soldiers of God, said Wednesday’s attack had been carried out to avenge the hanging of their leader Abdulmalek Rigi.

“This operation was a revenge for the hanging of the head of the movement Abdolmalek and other members of Jundallah,” the group said on its website junbish.blogspot.com.

“In this suicide operation in the city of Chabahar, tens of guards [members of the Revolutionary Guard] and mercenaries have been killed. The operation was carried out to expose the aggressors in Baluchestan.”

The attack came as Shia Muslims marked the climax of Ashoura, a ritual that commemorates the seventh century death of Prophet Mohammed’s grandson, Hussein.

Seyyed Ali Baateni, the governor of Chabahar, said that there had been “two suicide bombers, one of whom has been arrested. The other detonated his explosive vest before being arrested”.

“Baateni says there has been only one explosion, two bombers and anything other than this is denied,” Alireza Ronaghi, Al Jazeera’s correspondent in Tehran, said.

“But I think the death toll may rise.”

Mahmoud Mozaffar, a senior Iranian Red Crescent Society official, said emergency services had been put on alert over the past few days because of anonymous threats, according to the news agency, ISNA.

Alaeddin Borujerdi, the head of parliament’s foreign affairs committee, accused the “intelligence services of the United States and Britain” of being behind the attack, the ISNA news agency reported.

Ali Abdollahi, the deputy interior minister, said the “equipment used shows that they are terrorists supported by the intelligence services of the region and the US,” IRNA said.

The area where the attack took place is home to the armed Jundullah group, which claims it is fighting alleged discrimination against the area’s Sunni ethnic Baluchi community.

Unlike most of Iran, Sistan-Baluchestan has a significant Sunni community and has seen persistent unrest in recent years.

Jundallah, which says it is fighting for the rights of the province’s large Sunni ethnic Baluchi community, has claimed many deadly attacks on Iranian security forces over the past decade as well as assaults that have led to civilian deaths.

“It seems to be that [Jundullah is] trying to make a point and several of their attacks have near or around Shia mosques,” Massoumeh Torfeh, an Iran analyst at the School of Oriental and African Studies in London, told Al Jazeera.

“It appears they are trying to discredit the government by saying that neither Shia Islam or government is able to cope with us.”

In July, Jundullah claimed an attack on a mosque in the provincial capital Zahedan that targeted the Revolutionary Guard and left at least 28 people dead. 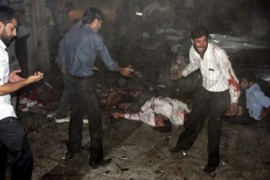 Scores arrested as officials blame the West and Israel for Thursday’s blasts at mosque. 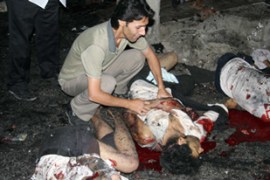