Silvio Berlusconi, Italy’s prime minister, has won back-to-back votes of confidence in the Italian parliament but has been left with a razor-thin majority that will make it hard for him to govern effectively.

In the second and most dramatic of Tuesday’s votes, Berlusconi survived a no-confidence motion in the lower house by three votes, 314 to 311.

Voting in the lower house was briefly interrupted after Katia Polidori voted in favour of Berlusconi, sparking jeers.

Polidori is a member of the group of lawmakers loyal to Gianfranco Fini,  the Chamber speaker who broke with Berlusconi this summer, precipitating the political crisis.

Outside, protesters attacked a police van and tossed flares during anti-government protests outside parliament in Rome.

Earlier in the day, Berlusconi had secured a more comfortable victory in a confidence vote in the Senate.

Nazanine Moshiri, Al Jazeera’s correspondent in Rome, said police there are “prepared to fight” protests against the “tiny, tiny majority”.

The wafer-thin win will not give the 74-year-old pr the strength to push through the kind of reforms authorities such as the Bank of Italy believe are needed to address deep-seated problems in the economy.

Italy has one of the heaviest public debt burdens in the world, at almost 120 per cent of gross domestic product. But it has largely escaped the euro zone debt storm thanks to tight control of spending and a conservative banking system that avoided excess during the market boom.

Our correspondent said that it remains to be seen whether Berlusconi will decide to hold a snap election in the spring in order to secure a greater majority.

Had Berlusconi lost in the lower house, he would have had to resign, potentially opening the way to early elections more than two years before they are due in 2013.

But with the vote out of the way, attention now switches to the concessions Berlusconi will have to offer to centrists and rebels on the centre-right to secure a longer term alliance.

Many critics and analysts have predicted his demise over the past two years because of a series of corruption and sex scandals, including most recently allegations over his relationship with a nightclub dancer.

His populist style has earned him the adoration of part of the Italian public but he is loathed by others and has been increasingly dogged in recent years by scandals and a series of embarrassing international gaffes.

Berlusconi has been charged with corruption in connection with a bribe payment in return for witness evidence favourable to the prime minister, but he escaped sentencing because the case had expired under a 10-year statute of limitations.

Despite numerous other charges, he has never been convicted of any crime.

Italy’s third richest man, Berlusconi likes to play up his Latin-lover persona and some of his most  damaging scandals have involved a parade of alluring young women.

Among the prime minister’s most shocking blunders have been likening a German member of the European Parliament to a Nazi concentration camp guard and calling Barack Obama, US president, “suntanned”. 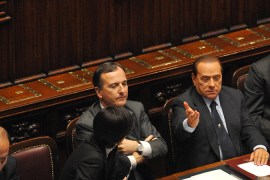 The turbulent political and personal life of Italy’s prime minister at a glance.

Union stages action in latest string of protests across Europe over budget cuts. 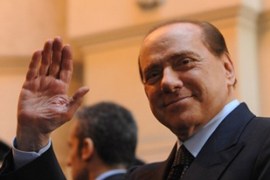