At least 25 people have been killed and over 100 injured after a fire broke out at a garment factory near Dhaka, the Bangladeshi capital, officials have said.

Golam Mostafa, a fire official, told the Associated Press that the fire broke out at a factory owned by the Hameem Group located in the Ashulia industrial zone, 25 km north of the capital.

Local media has reported that rescue efforts are ongoing and at least 25 bodies have been loaded onto ambulances.

Firefighters were trying to douse the blaze and rescuers were retrieving the injured and getting trapped workers out of the factory.

At least 50 people with serious burns were taken to hospitals. Some of them were injured in a stampede as hundreds of workers tried to escape, according to local media said.

Soldiers from a nearby military district joined the rescue and air force helicopters plucked some people from the roof of  the building, witnesses said.

The fire broke out on the ninth floor and quickly spread. More than 10,000 people, most of them women, work at the complex, Arifa Ahmed, an official of the factory owned told Reuters news agency.

“The good luck was that many of them were out for lunch (when the fire started),” she said.

Bangladesh has about 4,000 garment factories that export more than $10bn worth of products a year, mainly to the United States and Europe.|

The fire comes after recent protests by low-paid garment workers across the country.

Workers demanding the implementation of a new minimum wage clashed with police at an industrial zone in southeastern Bangladesh on Sunday, leaving up to three people dead and 100 injured. 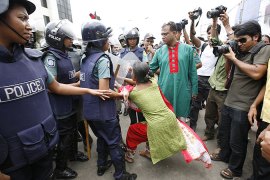