Police say the man who died in a blast in Stockholm, the Swedish capital, had been well-equipped with explosives, and was likely to have had help plotting the attack, describing it as “well planned”.

“We know from experience that there are normally more people involved [in these kinds of cases] … I would say that the investigation is assuming that he had accomplices,” Anders Thornberg of the Swedish security service, said on Monday.

He said the bomber was not previously known to Swedish intelligence.

Linda Nyberg, reporting for Al Jazeera in Stockholm, said police are looking for a second or third person who might have helped the bomber.

“That means people here are getting a little more scared because police are looking for more suspects. There’s been raids in Stockholm all over in apartments that have connections to this person,” she said.

Tomas Lindstrand, Sweden’s chief prosecutor, said the attacker could have been aiming to attack the main train station or a department store when the device went off prematurely.

“It is not a very wild guess that he was headed to some place where there were as many people as possible, perhaps the central station, perhaps [department store] Ahlens,” he said.

Lindstrand added that the attacker was carrying a large amount of explosives, wearing a bomb belt and a rucksack with a bomb.

“He was also carrying an object that looks something like a pressure cooker. If it had all exploded at the same time it could have caused very serious damage.”

A car containing gas canisters blew up in a busy shopping area on Saturday afternoon followed minutes later by a blast nearby which killed the bomber and injured two people.

Lindstrand said the man had been “98 per cent identified” as Taimour Abdulwahab al Abdaly, a Swedish citizen believed to have arrived from Iraq in 1992, and most recently lived in Britain.

But that man could not yet be named with certainty because DNA tests had not been performed and the family had not identified the body, he said.

Shumukh al-Islam, a pro al-Qaeda website, had also named the 28-year-old as the man responsible for the explosions.

British police searched a property in southeast England overnight on Sunday, thought to be the house where Al Abdaly had lived with his wife and three children.

“No arrests have been made and no hazardous materials found,” London’s Metropolitan Police said in a statement on Monday.

Neighbours told reporters they had seen the suspect at the house in Luton, 50km north of London, two weeks ago.

Reports have also emerged that Al Abdaly had left a local mosque after being challenged for his radical beliefs.

Farasat Latif, secretary of the Luton Islamic Centre in Britain, said he had attended  the centre “for a couple of months” in 2006 or .

Latif told the AP news agency that Al Abdaly was “very friendly” at first but then started to preach radical ideas, which focused on “suicide bombings, pronouncing Muslim leaders to be disbelievers, denouncing Muslim governments”.

But said “nothing pointed to the fact that he was going to do something stupid”.

Al Abdaly studied sports therapy at the University of Bedfordshire in Luton, graduating with a degree in 2004. 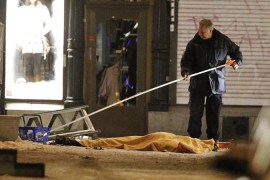 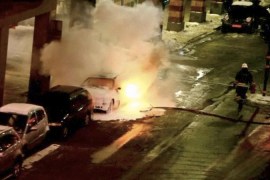