Kuwaiti authorities have closed the office of Al Jazeera over coverage of a police crackdown on a public gathering.

“Today, I received a phone call from the information ministry informing me that the office has been closed immediately and our accreditations have been withdrawn,” Saad al Saeedi, al Jazeera’s bureau chief in Kuwait City, said.

Ministry officials had delivered the office a letter that stated the reason for the closure was “the latest developments and your interference in Kuwait’s internal affairs,” Saeedi said, quoting the letter.

Al Jazeera had aired extensive coverage of the police crackdown on a gathering held by the Kuwaiti opposition on Wednesday.

It showed footage of police beating activists and aired interviews with members of the Kuwaiti opposition following the clashes in which four Kuwaiti members of parliament and a dozen citizens were hurt.

Al Jazeera denies the charge of meddling in Kuwaiti affairs, saying it was just doing its job.

Kuwait closed the office of al Jazeera in November 2002 in the run-up to the US-led war on Iraq because it said the channel took a hostile stand against Kuwait, and for security reasons, before reopening it in May 2005.

The oppostion lawmakers represent the Development and Reform Bloc, an Islamist group, the liberal National Action Bloc and the opposition Popular Action bloc.

Political parties are banned in Kuwait, so parliament is made up of individuals who form loose blocs.

Barrak, one of the three MPs, told reporters on Monday that there was broader support for questioning the prime minister than in previous instances, with three parliamentary blocs and a large number of independent lawmakers backing the move.

The questioning would take place during the December 28 session of the assembly, Jassem al Kharafi , the parliament speaker told state news agency KUNA, if the prime minister agrees to it.

Kuwait’s parliament, the most outspoken in a region mostly governed by ruling families, has triggered numerous cabinet resignations or reshuffles through questioning and no-confidence motions, which have also resulted in delays to economic reforms.

Last year, Sheikh Nasser, a senior member of the ruling family and a nephew of the ruler, agreed to be questioned by parliament, which was a first for a head of government in the Gulf state.  He survived the questioning.

Sheikh Sabah al Ahmad al Sabah, the country’s ruler, and his predecessors have in the past reshuffled governments or dissolved parliament after lawmakers made similar requests that could pave the way for votes of confidence.

Frequent government reshuffles, resignations and parliament dissolutions have delayed economic reform bills, including the creation of a markets watchdog. 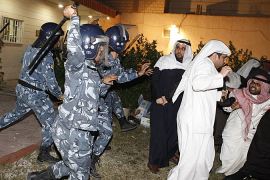 Opposition MPs say they hold PM responsible for a police crackdown at a public rally that left several people injured.