A 27-year-old man who worked in at least two nursery schools has been arrested in Amsterdam on suspicion of abusing up to 50 young children.

Robert M. was identified and arrested by police in the Netherlands last week and more than 50 parents were contacted on Sunday.

The suspect worked as a substitute teacher at the preschools in the city and also offered baby-sitting services online.

It is feared to be one of the worst cases of child abuse in the Netherlands, Eberhard van der Laan, the city’s mayor, said at a late-night press conference on Sunday.

“This is about a serious suspicion of grave abuse by a man who was arrested on Tuesday and has been held since then,” Van der Laan said.

“I see it as my most important job to inform parents as well as I possibly can,” he added.

The suspect in the Amsterdam case was arrested after a Dutch police television programme aired what it said was an image of an unidentified victim of child pornography.

US authorities seized the image in a separate investigation and told their Dutch counterparts it was made in the Netherlands, Herman Bolhaar, the Dutch chief prosecutor, said.

The victim’s parents identified their child from the television image and called police, leading to the suspect’s arrest the same night, Bolhaar said.

The man’s computers containing child pornography were seized and he has since confessed to dozens of sex crimes allegedly committed over the past year and a half, Bolhaar said.

The victims were boys and girls under four years old, he added.

Dutch media reported on Monday that a mother who had suspected that her child had been abused at one of the nurseries filed a complaint in 2008. She said she had not been taken seriously by either the nursery or the police.

Mayor Van der Laan urged media not to publish photographs of the children possibly affected, and to be reserved in contacting their parents.

Police identified the suspect as a Dutch citizen originally from Riga, Latvia, and also published his photo – an unusual step, as privacy laws usually prevent publication of photographs of suspects in the Netherlands.

Van der Laan said that the photo had been released in part to reassure the thousands of parents in Amsterdam whose children were not affected.

“At the same time we want to alert others that it indeed was their babysitter,” he said.

Interpol said it had helped authorities in the Netherlands confirm that the image seized by American investigators was of a Dutch child.

Bolhaar noted the suspect was a specialist in encryption and his computers had sophisticated protection.

A candle was left on Sunday night on the steps of one of the affected day care centers. An attached note bore the single word: “terrible”. 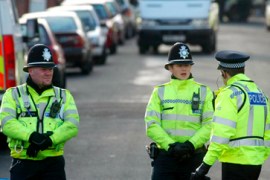