The elder son of jailed financier Bernard Madoff has been found dead in New York in an apparent suicide.

Mark and his brother, Andrew, were under investigation but hadn’t faced any criminal charges in the massive Ponzi scheme that led to their father’s jailing.

Bernard Madoff swindled a long list of investors out of billions of dollars and is serving a 150-year prison term in North Carolina.

The scandal put a harsh light on members of the swindler’s family. The financier’s brother, Peter, played a prominent role in the family’s company.

Mark and Andrew Madoff both worked on a trading desk at the firm, on a side of the business that was not directly involved in the Ponzi scheme.

A year ago, the court-appointed trustee trying to unravel Madoff’s financial affairs sued several members of the family, including the brothers, accusing them of failing to detect the fraud while living lavish lifestyles financed with the family’s ill-gotten fortune.

In February, Mark’s wife petitioned a court to change her last name, saying her family had gotten threats and was humiliated by the scandal. 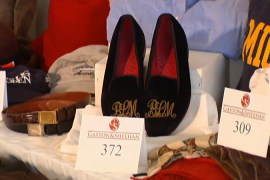 Bernard Madoff’s bounty up for sale

Nearly 500 items seized by US marshals – remnants of the fraudster’s once opulent life – are being auctioned off. 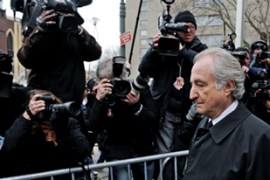