The president of Cote d’Ivoire has hinted that he is open to negotiations with his political rivals to end the crisis which followed last month’s disputed presidential poll.

Laurent Gbagbo made the comments in the state-run Fraternite Matin newspaper on Friday, dismissing fears of a possible resumption of war in the West African nation.

“We hear people say there will be war, that there will be an explosion. There will not be a war here. Things will end up with us sitting down [together],” he was quoted as saying.

After the November 28 vote, a top legal body named Gbagbo as president, reversing election commission results that revealed that his rival Alassane Ouattara had clearly won the vote.

Both men say they are serving as president, having named prime ministers and their respective governments.

Ouattara has been recognised by the United Nations as well as the African Union, which has suspended Cote d’Ivoire until Ouattara takes up his post. The US and the European Union have also urged  Gbagbo to step down.

Guillaume Soro, who quit as Gbagbo’s prime minister to take up the offer of the same job under Ouattara, suggested the deadlock would soon ease.

“Things will return to normal in coming days. As far as I am concerned, from next week I will be at my offices to tackle the tough problems and urgent concerns of the Ivorian people,” he told reporters, without elaborating.

At present, government buildings are in the hands of pro-Gbagbo officials. Ouattara and Soro are based in Abidjan’s Golf Hotel, ringed with barbed wire and guarded by dozens of UN peacekeepers.

Ouattara has called on civil servants not to go to work and the usually busy government tower blocks were largely quiet on Friday.

“Lots of our colleagues have not come to work today,” Roger Zan, a civil servant, told Reuters news agency.

“There is virtually no activity in the corridors. The civil servants are still afraid.” 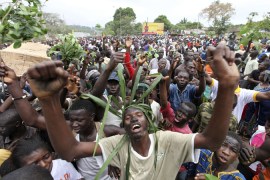 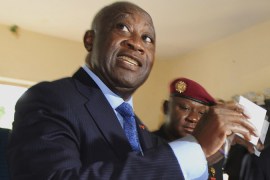 Incumbent president remains defiant amid growing international calls for him to step down.