A private company in the US has launched a spacecraft into orbit in a test flight that NASA hopes will lead to the first commercial space station supply run next year and eventual astronaut rides.

The capsule successfully reached its intended 300-kilometre-high orbit, drawing cheers among employees for the company known as SpaceX.

“Great day here at SpaceX. Looks like we had a great flight,’ a launch commentator at the Cape Canaveral Air Force Station in Florida said.

No one was on board the Dragon space capsule, but it has room for seven crew and an ample cargo hold that could supply the International Space Station, after NASA retires its space shuttle fleet next year.

In the absence of cargo and crew, the “Dragon capsule is carrying a few thousand patches, employee badges for the SpaceX company and some other mementos,” NASA said.

SpaceX intends for Dragon to circle the world twice, then attempt a re-entry from low orbit before parachuting into the Pacific Ocean, 800 kilometres off the Mexican coast.

NASA is hiring companies like SpaceX to haul supplies to the International Space Station following next year’s shuttle retirement. Taxi trips for astronauts may follow.

The test flight had been scheduled for Tuesday, but was delayed to repair cracks in the upper-stage rocket nozzle. Wednesday’s countdown was held up briefly by a false reading that triggered an abort.

SpaceX’s first flight of a Falcon 9 rocket, in June, carried a capsule mock-up that deliberately burned up on re-entry.

The rocket stands at 158 feet (48 metres), about the height of the shuttle’s external fuel tank.

“Getting this far, this fast, has been a remarkable achievement,” Phil McAlister, NASA’s acting director of commercial spaceflight development, said.

He stressed that this was a test flight and that spaceflight is “very, very difficult.”

“The purpose of the test flight is to learn. So as long as we’re learning and we have a clear path for demonstration flight two, we would consider that successful,” McAlister told reporters earlier this week.

The California-based SpaceX – created by Elon Musk, the PayPal co-founder – intends to begin station deliveries by the end of 2011.

He said he could be launching station crews within three years of getting the go-ahead from NASA.

NASA is already relying on Russia to ferry US astronauts to and from the space station, under a costly arrangement – $26m per person this year, rising to $51m next year, and $56m in 2013.

Ideally, NASA wants multiple companies to take over the job of cargo and crew transport.

The effort has taken on increased significance, McAlister said, since the working lifetime of the space station was extended to at least 2020.

SpaceX currently has a $1.6bn contract with NASA for 12 supply runs. Orbital Sciences Corp. of Virginia has a $1.9 bn contract for eight.

Gwynne Shotwell, the SpaceX president, said her company has poured more than $600m into the test flight effort so far and received $278m from NASA. She took aim at critics, some of whom do not trust companies to provide the same level of crew safety as NASA.

“I bristle a little bit at the whole concept of ‘cutting corners,’ “she said this week. “Just because it’s faster doesn’t mean it’s more risky.”

The space agency hopes to get funding for a third and final flight next summer, to restock the orbiting lab in case the commercial launch companies fall behind. 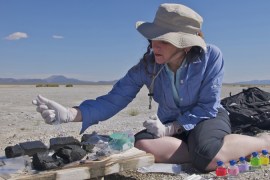 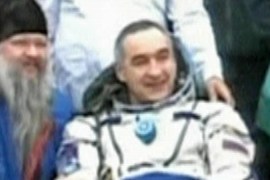 Soyuz capsule lands back on Earth

Two cosmonauts and one Nasa astronaut touch ground in Kazakhstan.