The Panama Canal has reopened after heavy rains forced its first closure in over two decades.

The 17-hour suspension had been ordered after the rainfall swelled nearby lakes, flowing into the key transport route that handles five per cent of global trade each year.

“The canal is now operating; the suspension was the result of the inclement weather around the canal basin and this part of the country,” Alberto Aleman Zubieta, the canal administrator, said on Thursday.

On Wednesday, the Panama Canal Authority said downpours had filled the Gatun and Alhajuela lakes to historic levels, forcing it to suspend traffic for the first time since 1989 when the US invaded the country.

Ricardo Martinelli, the president of Panama, said it was the first time the canal had been closed because of weather since it opened in 1914.

“Our meteorologists say it’s never rained so much in Panama in the 73 years that we’ve kept climate records,” Martinelli said.

He said eight people had died as a result of the recent flooding.

The country’s Civil Protection System put eastern Panama on high alert and issued evacuation orders for about 1,500 people in dozens of flooded neighbourhoods.

The 80km man-made artery links the Atlantic to the Pacific, with around 40 ships passing through the canal each day.

Last year, work began on a $5.2bn project to enlarge the canal by constructing a third set of locks to ensure that today’s super-size container ships, cruise liners and oil tankers – many of which are too wide for the canal – will be able to navigate the waterway in the future.

The third set of locks, parallel to the existing two, would accommodate vessels 366 metres in length, 49-metres wide and with a 15-metre draft.

The work should be completed by August 2014, a century after the canal’s inauguration.

South America has been lashed by the heaviest rains in decades, with the yearly monsoon season made worse by the La Nina weather phenomenon.

The canal was built between 1904 and 1914 by the US after an initial French attempt failed.

It was returned to Panama’s control 11 years ago. 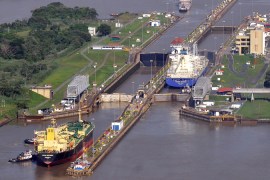 Heavy rain forces canal to close for the first time in 21 years as flooding in the area kills at least eight people.